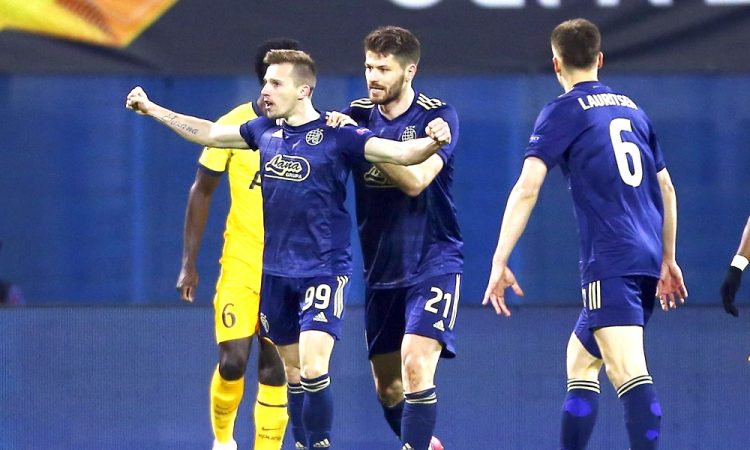 ZAGREB, March 19: Dinamo Zagreb sent Tottenham Hotspur crashing out of the Europa League after a stunning hat-trick by forward Mislav Orsic gave the Croatian champions a 3-2 aggregate win over the English side in their round of 16 tie on Thursday.

Dinamo won 3-0 on the night after extra time to reach the quarter-finals on coach Dario Krznar’s debut after he took over on Monday from Zoran Mamic, who stepped down upon learning he faces a prison sentence for fraud.
Trailing 2-0 from the first leg, a resurgent Dinamo pulled one back in the 62nd minute when Orsic beat visiting goalkeeper Hugo Lloris with a thunderbolt from 18 metres into the top corner after he cut inside the from the left.
Orsic levelled the tie in the 83d with an unstoppable first-time shot past Lloris from eight metres after a flowing move saw substitute Iyayi Atiemwen square the ball to the 28-year old from the right flank.
Orsic put the icing on the cake in the 106th minute with a dazzling solo effort as he beat four visiting defenders with a jinking run before unleashing a low drive past Lloris from the edge of the area.
Intense Spurs pressure in the last 10 minutes of the absorbing contest saw them miss a pair of sitters as home keeper Dominik Livakovic denied Gareth Bale and Harry Kane.
Paul Pogba goal sends Manchester United into Europa League last eight

Manchester United reached the Europa League quarter-finals after a brilliantly-taken Paul Pogba goal earned them a 1-0 win at AC Milan to secure a 2-1 aggregate victory in their last-16 tie on Thursday.
Pogba came off the bench at halftime to make his first appearance for United since Feb. 6, and the France midfielder made an immediate impact as he turned the tie in his side’s favour three minutes after the break with a fine goal.
Former United striker Zlatan Ibrahimovic came on as a substitute to try to drag Milan back into the match, and he almost equalised in the 74th minute but was denied by a good save from the visitors’ goalkeeper Dean Henderson.
Milan applied plenty of late pressure but United held on to remain in the hunt to win their first trophy since a Europa League success under Jose Mourinho in 2017.
Europa League: Arsenal reach last eight despite defeat by Olympiakos

Arsenal endured a nervous night as they lost 1-0 to Greek side Olympiakos on Thursday but progressed into the Europa League quarter-finals 3-2 on aggregate.
After a 3-1 victory in Athens last week and reaching halftime unscathed in the return, Arsenal looked comfortable.
But when Youssef El Arabi’s deflected shot left Bernd Leno wrong-footed early in the second half it gave the visitors hope and increased the tension among the home ranks.
Arsenal wasted several late chances to ease the jitters with captain Pierre-Emerick Aubameyang, restored to the starting line-up being left out of Sunday’s north London derby for disciplinary reasons, guilty of a poor miss.

Olympiakos had Ousseynou Ba sent off late on and Arsenal were spared any late dramas as they avenged last season’s elimination by the Greek champions to take their place in Friday’s last-eight draw. (Reuters)