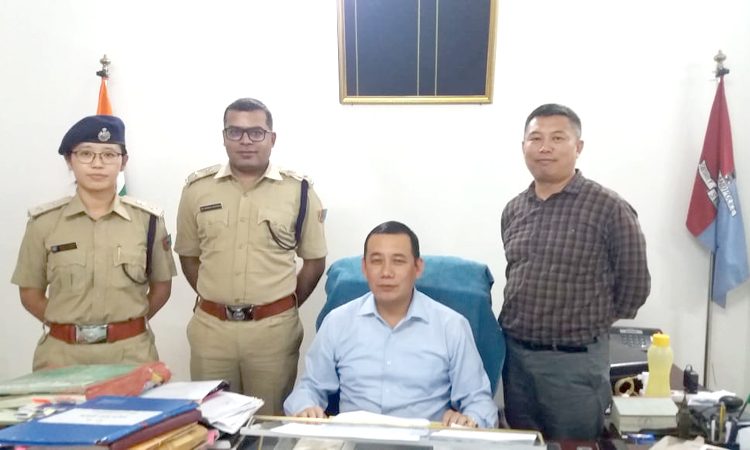 ‘UGs have outsourced extortion to civilians’

Dimapur, September 24: Dimapur police has advocated more stringent laws to tackle illegal taxations and extortions in the State, particularly in Dimapur District.
“I would welcome any such act that will empower the police,” said Commissioner of Police, Limasunep Jamir, IPS while interacting with media persons at his office today.
The Commissioner’s statement assumes significance as there is a demand from the Public Action Committee (PAC) of Naga Council Dimapur for enactment of stringent laws to tackle extortion.
While illegal collections and extortion have become a burning issue in Dimapur, the Commissioner of Police claimed that police has been doing commendable job in tackling criminals, especially extortionists.
Presenting data of last three years, the Commissioner disclosed that in 2017 a total of 97 cases were registered and 137 extortionists arrested, in 2018 altogether 137 cases were registered and 207 extortionists arrested and in 2019 till date 109 cases have been registered and 157 extortionists arrested.
He said all these arrested people belong to underground groups or are middlemen, civilians and sympathizers. He said in 2017, Rs 1,42,000 was recovered, in 2018 Rs 9,05,000 and in 2019 till date Rs 17,51,000 have been recovered from extortionists, besides arms and ammunitions.
He disclosed that 90% of the cases are suo moto cases without any formal complaint from the victims. He said these cases were detected by Dimapur Commissionerate, Anti Extortion team, SOT, mobile units and E-patrolling units.
“Various UG functionaries are unscrupulously and blatantly operating under the guard of ceasefire ground rules, including the card holders,” he said adding the matter shall be raised appropriately with the Police Headquarters and the Chairman, CFMG.
Limasunep also disclosed that some joint operations are being conducted with SP Karbi Anglong, particularly in no-man’s land along the Assam-Nagaland borders.
The Commissioner revealed that the modus operandi of extortion activities have completely changed today. “Business of extortion has been outsourced,” he said and explained that members of the UG groups have given the task of collection to different people, while they sit somewhere else. He said one person is now collecting illegal taxes in the name of different groups.
Limasunep said police has heightened surveillance in Dimapur districts and has placed CCTV cameras at 25 odd locations, adding the surveillance will be further enhanced.
On being asked about the conviction rate of the criminals in the last three years, he said in 2017, 27 cases have been convicted while 61 remains pending, in 2018, 29 cases were convicted and 113 remains pending and in 2019 till date 17 have been convicted while 71 remains pending.
He said the quantum of punishment in these cases vary from 6 months to one year.
The Commissioner of Police appreciated the concerns of the civil societies, various stakeholders, PAC, Naga Council Dimapur and hoped that they shall continuously adhere to the rule of law.
He said heightened vigilantism can easily degenerate to the rule of mob and cause serious public disorder. He appealed to various civil societies, stakeholders to be mindful of reasonable restraining clauses of the constitution and statutory laws.
DCP Zone I, Naieem Mustafa lamented that in most of the cases, police do not get witnesses to prove the case. He said victims do not come forward with complaints in extortion cases. He appealed to all to jointly fight extortion and come forward with complaints so that criminal justice system is put in place.
Presenting the statistics of extortion in Dimapur in the last three year, ADCP (Crime), Relo T Aye disclosed that out of 139 extortion cases in 2017, 78 were civilians, in 2018, out of 203 cases, 134 were civilians and in 2019 till date, out of 157 cases, 95 were civilians. (Page News Service)