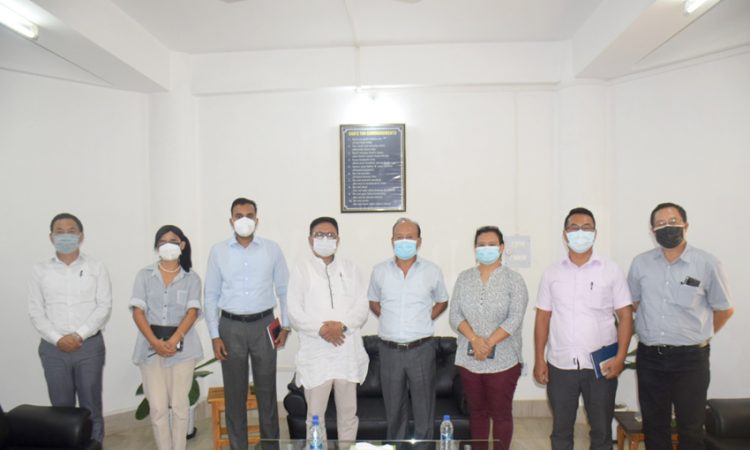 DIMAPUR, JUNE 23: Fearing shortage of COVID vaccines, Team Dimapur on Wednesday decided to seek more doses for the district from the State Government.
According to a DIPR bulletin, this decision was taken during a coordination meeting of Team Dimapur, which was held to take stock of the COVID-19 situation and plan strategies for future course of action, it stated.

“Deliberating on the issues of vaccination, Team Dimapur observed that the death rate was showing a declining trend as many people have taken the vaccination. The Team acknowledged the State Government for giving sufficient vaccination doses earlier too for Dimapur District and further decided to request the Government for more vaccines considering the high population, and as more people are coming forward for vaccination. It observed that the 13,719 doses presently available in the District may see a shortfall as the District through the Medical Department would be taking up aggressive vaccination till June 30”, it stated.
They also decided to intensify the ongoing random testing in crowded areas and markets, and carry it out on war footing till June 30.
The Team also observed that the State Government has taken the right decision in banning stoppage of trains at Dimapur Railway station, which has drastically helped in containing the pandemic.
Nodal Officer for Dimapur District, Y Kikheto Sema emphasised on the need to get people vaccinated stating that the 3rd wave is expected between September/October as per expert prediction.
DC Dimapur, Rajesh Soundararajan said that the district is now better prepared and observed that the present restrictions in place have worked favourably.

On the other hand, he expressed concern for the business community and suggested a calibrated approach. Soundararajan further said that the district would now have to prepare to fight the 3rd wave of the pandemic.
Commissioner of Police, Dimapur, Rothihu Tetseo informed that from May 17 till date, there have been around 400 penalties and felt that public response has been very positive.
(Page News Service)