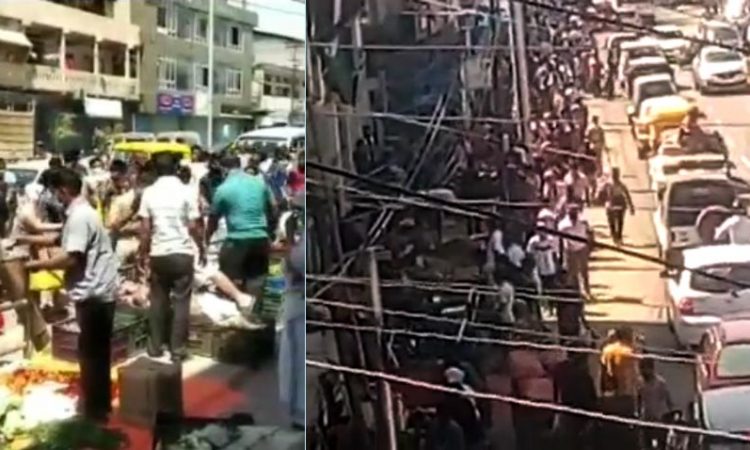 A scene in Nyamo Lotha Road, Dimapur where hundreds of people gathered to buy vegetables on Monday

Dimapur/Kohima, March 30: Dimapur saw a surge in panic buying by citizens on Monday making a mockery of the lockdown in place. The same was also the case in State capital Kohima.
Almost all markets in Dimapur saw people jostling for space, particularly at the Naga Bazaar in Old Market, in the New Market and Nyamo Lotha Road where most of the vegetable vendors were placed, as panic buyers tried to grab any and every essential items in the shelf. There was no monitoring from any authorities and social distancing appeared to be the last thing on the minds of the panic citizens.
The roads leading to the markets were jammed with vehicles despite the lockdown, giving the appearance that it was like any other normal day in Dimapur.
The huge turn-out of people to buy essential commodities and medicines on daily basis has become a problem to the Dimapur Municipal Council and the law enforcing agencies also, as they are unable to control the crowd which goes on increasing till noon.
“So many people are coming out together to buy groceries and vegetables as if the stock of essential commodities will run out,” a young man, who was purchasing vegetables at Nyamo Lotha Road said. He said that there were rumours suggesting that shops for essential commodities and vegetable would open only for few hours and on alternate days in Dimapur, which might have triggered panic among the people to rush to the market.
While there have been no such directives to open market on alternate days and only for few hours, the people seem to believe in the rumours rather than follow the official directives of the district administration.
Today, as the number of people increased many fold in all the areas, even creating traffic jams, the officials of the Dimapur Municipal Council forced closure of vegetable shops set up by the vendors on the roadside by noon.
According to an official of the DMC, the vegetable vendors have been asked to maintain a considerable distance while selling vegetables, but they have not been following that. Even on Saturday, the situation was similar in New Market where all vegetable vendors sat together in one place, but were dispersed later by the DMC officials.
Seeing today’s rush of people in the market, the Western Sumi Hoho has urged the Government to impose a total lockdown of Dimapur town immediately “before the COVID-19 bomb explodes here and wipe out the Naga population.”
“The Dimapur scenario witnessed on the 30th March where thousands of people thronging the market places and streets at times such as this was a sign of stupidity and insanity. Enough guidelines and awareness have been issued and now the public also have to play their own responsible part and remain disciplined,” it said.
The Dimapur Naga Students’ Union (DNSU) also expressed shock at the outburst and rampant public gathering seen today at Dimapur for buying essential commodities and others without maintaining social distance as per the directive of the Government. It expressed concern over the free flow of public without maintaining proper social distance of one metre and questioned who is to be held responsible for the same – the public or the government?
In Kohima it appears to have been fueled by rumours that that the district administration will be enforcing opening of essential commodities shop on alternate days from March 30.
Not only the markets, but almost all roads in the capital town saw heavy flow of vehicles, which was not witnessed during the first week of the lockdown.
Asked the reason for the panic buying, many citizens said they got information that like the fruit vendors which are open on Monday, Wednesday and Friday, even the groceries will be open for the said three days in a week and subsequently there will be complete lockdown.
Though proper demarcations have been made outside the shops, people were seen not maintaining any social distance in their rush.
When contacted, Deputy Commissioner of Kohima, Gregory Thejawelie confirmed that there is no such order to open groceries and other essential commodities shops on alternate days. He requested people not to be swayed by rumours but confirm news/reports from the authorities before believing it. (Page News Service)