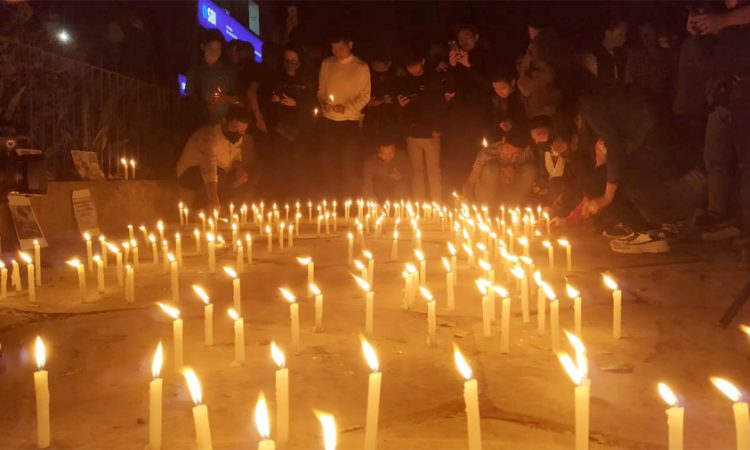 Dimapur, March 7: Singing “We shall overcome” and displaying the three-finger salute, hundreds of youths on Sunday gathered here at the Super Market to register their symbolic protest against last month’s military coup in Myanmar and the subsequent killing of a number of protestors by the military in the country.

The candle light vigil in solidarity with the “Myanmar protest” was not organized by any particular organization but by citizens to show solidarity to the people of Myanmar. Since Myanmar’s military seized power on February 1 by ousting Aung San Suu Kyi’s elected Government, there have been growing civil protests in Myanmar against the coup.
37-year-old entrepreneur Kevitho Kesa gave a brief summary of the events that took place since the coup in Myanmar and how social media, media, and internet have been restricted. He said the death of a 19-year-old protestor with the writings on her t-shirt “everything will be ok” has affected everyone.
TSUD president Rukewezo Wetsah said while some might think the protest in Dimapur might be insignificant, but any action that condemns any violence is never a small thing and urged all to write about it on every social media platforms with the hashtags #PrayforMyanmar and #YouareNotAlone.
Quoting Eleanor Roosevelt’s “It isn’t enough to talk about peace. One must believe in it. And it isn’t enough to believe in it. One must work at it”, he said the Myanmar people are now being deprived of their basic rights.
DNSU president Sedevilie Angami said this is not the first time that the people in Myanmar are facing such situation and protesting against it and even when a parliamentary form of Government was established the military there used to have its control over it.

He said that the actions of the military against peaceful protestors are condemnable and the dictatorial exercising of power on the people, which isn’t less than a genocide, must be condemned by all countries. (Page News Service)