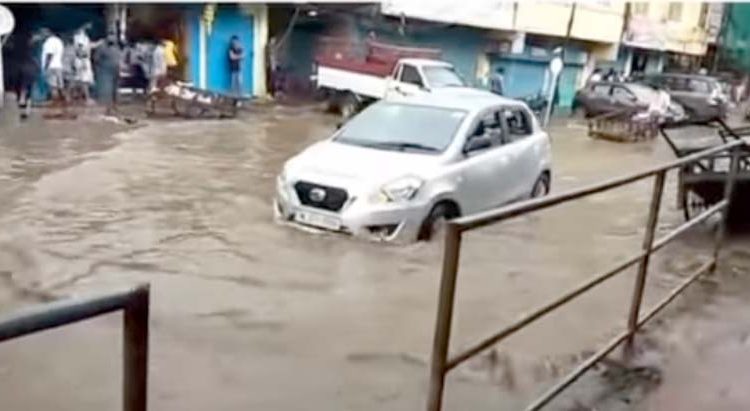 Dimapur, June 22: A half-hour of heavy rain Friday afternoon flooded many areas in Dimapur town putting life out of gears while at the same time indicating how Dimapur is prone to artificial flooding during monsoon mainly due to lack of proper drainage system.
With water level rising in the town after the nearly 30 minutes of heavy rain Friday afternoon, vehicles plying on GS Road were seen partially submerged in some places, while two-wheel riders had a harrowing time with their vehicle breaking down and had to be pushed through muddy waters. Water also flowed into many shops with the rising flood water.
A similar scene was witnessed in Super Market area where the road was filled with more than a foot of water preventing vehicles to ply. This area does not have drainage facilities, and is flooded ever time there is a downpour. Many vehicles were seen stranded in the flooded waters in Super Market.
Friday’s heavy rain in Dimapur also showed how the State monsoon preparedness plan for 2019 had failed. The monsoon preparedness plan this year in the wake of last year’s (2018) havoc during monsoon was to conduct a State Government sponsored one day statewide social work, which was conducted in late May this year. The plan was that the social work, focused mainly on cleaning drains, will ensure free flow of rain water so that there will be no floods, landslides, etc this year.
But 30-minutes of heavy rains in Dimapur today had proved how lame and deficient the State monsoon preparedness plan was.
The road between Dimapur and Kohima is another disaster waiting to happen, with vehicles losing traction and slipping due to the slushy road condition, particularly in and around Piphema village. Vehicles, particularly trucks, capsized on roadside or vehicles broken down on the road after going over large potholes covered by muddy waters is a regular sight on the Dimapur-Kohima route. The contractors undertaking the 4-lane works or the State authorities are apparently doing nothing to put up caution signs or deploying personnel to ensure that any inconvenience or mishap does not befall commuters on this important route.
The State Government, particularly the State Disaster Management Authority, should revise their monsoon preparedness strategy before the monsoon season peaks in the State, as the State’s Plan A for monsoon preparedness (the 1-day statewide mass social work conducted in May) had apparently failed at its very onset. (Page News Service)