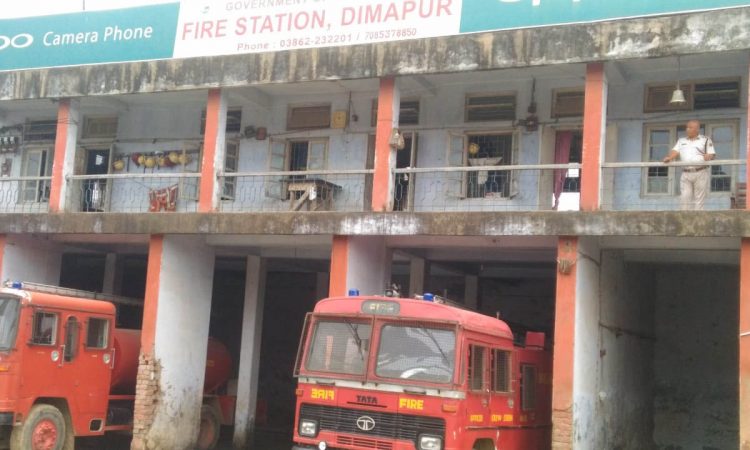 Dimapur, May 16: Cracked walls and ceilings, and water seeping inside the building from the roof narrates a tale of the neglect the old and dilapidated Fire Brigade office building in Dimapur had weathered over the years. The office building is a disaster waiting to happen, but the cries of the fire fighters to the higher authorities to get the building renovated have gone to deaf ears.
Reportedly the State Department of Fire & Emergency Services is not in favour of restoring the building as it will incur “unnecessary expenditure.”
Sources said the Department is moving for demolition of the building and constructing a new one instead. But in the meantime, the Department is playing with the life and limbs of the firefighters by consciously forcing them to operate from a building on the verge of collapse.
Talking to Nagaland Page, Officer-in-Charge of Dimapur Fire Brigade, A Wati Jamir admitted that cracks in the walls and ceilings of the office building are going from bad to worse. “It is going from bad to worse every year…water is seeping inside the rooms from the roof, while cracks are getting bigger and bigger,” he said.
Visibly frustrated at the condition of the Fire Brigade building, the brave fireman said, “Perhaps in the upcoming quarterly District Disaster Management Authority (DDMA) meeting, I should place a request to the authorities to come to our rescue if we are buried under the debris of the building.”
“This dilapidated building may come down any day upon us and we will be the one to be rescued by others,” he added.
The OC, however, refused to be drawn into a discussion on the reason behind why the Department is not renovating the all important office building in the district.
On the strength of fire fighters in the station, he said, “We are purely 50 fire fighters. It is not an office at all. It is purely a fire fighting team accommodated in the building with not a single peon.”
On the cases of outbreak of fire in Dimapur, he said, “In 2014 we attended to 92 fire calls and in 2015, 2016, 2017 there were 40 to 46 calls and in 2018, 39 fire call were attended”. In 2019 till date, we have attended to 20 fire calls and in one such cases two minors lost their lives, he said. Fire incidents in Dimapur have reduced a lot, he revealed.
The main cause for fire outbreaks in Dimapur, he revealed is negligence and carelessness of the occupants, and not electric short circuit as believed. The OC cited an instance of a fire incident which occurred due to carelessness on April 2 at Selouphe ‘A’ village, leading to the dead of two minors.
Safety of the family, our homes, office and business is a must, carelessness is costly, he added. But he had no answer, when pointed out that it was unsafe and could be construed as carelessness on their part for working from a building on the verge of collapse.
The OC also addressed the usual complaint about firefighters reaching the scene of any fire incident late. “People ridicule us for late arrivals but they should know the traffic congestions. Instead of paving free passage, motorists, pedestrians and lastly the crowds assemble at the spot and obstruct our paths despite the loud sirens of our fire engines,” he stated.
On fire safety measures, he said none of the old and new high rise buildings coming up in Dimapur in large numbers has an additional stairway through which people can be rescued from the engulfing fire. “Instead of double stairways, there are only single stairways in all these buildings and it is too dangerous for people who get caught in the web of fire.”
“Emergency exit is a must not only for buildings but for RCC and thatched houses too,” he added.
Expressing optimism that the two upcoming fire tender stations in Dimapur Stadium and the other in Jalukie will provide prompt services during the outbreak of fire incidents, he also advised people on giving the exact locations whenever a fire incident is reported. He said, “It not only saves time but lives and properties too”.
Wati appreciated the Inspector General of Fire Department, Neilasa Sophie who after taking charge has brought in major changes and improvements in the department.
Replying to a query about the status of the proposal for storing water by installing water storage facilities in several pockets of Dimapur as safety measure to minimize the spread of fire due to the traffic snarls and non availability of water during crisis, Wati said, “The proposal was not taken up since then”.
“As of now we have our own arrangements, we have fisheries owned by private entities in many areas of Dimapur and we will be able to use the waters from those fisheries if the need arises”.
He also informed that Dimapur Fire Station has its jurisdiction till Diphuphar and beyond Diphuphar it is being looked after by Chumekdima Fire Station. “People often get confused and we keep receiving calls even if a fire breaks out in the highway areas,” he added.
(Page News Service)