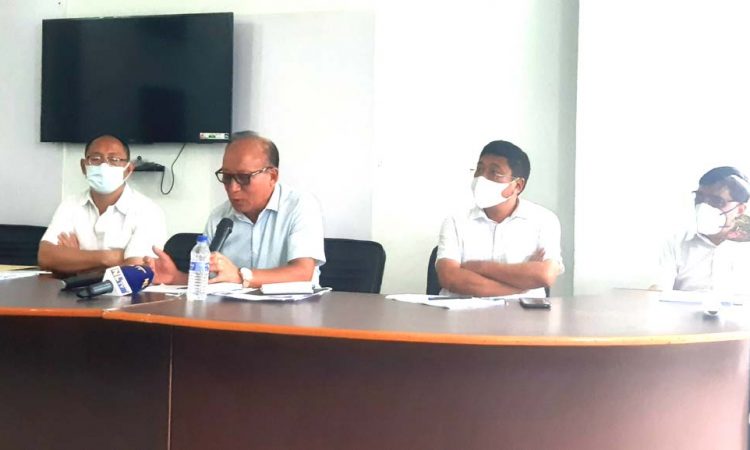 DIMAPUR, SEPTEMBER 1: Dr Sedevi Angami, Director of Christian Institute of Health Sciences and Research (CIHSR), Dimapur, on Wednesday said that there are a lot of allegations making rounds on the social media platforms like Facebook, YouTube etc. where doctors, medical workers, and hospitals are being targeted with one-sided stories and an impression is being created that doctors are crooks out to cheat people of their money.

Addressing media persons on claims that are being made on social media platforms against the medical fraternity, Dr Angami narrated an instance where an allegation was made against the doctors of CIHSR that they declared a person dead but when the body was brought home he turned out to be alive.
Dr Angami cleared that the person in that case was not declared dead in the first place but was discharged as the relatives wanted to take him home, but once he reached home, people gathered and someone who wasn’t even present at the hospital started the rumour that the patient was declared dead by the hospital authorities and it was a gross negligence on the part of the hospital. This prompted the hospital to file an FIR against the person.
Doctors of various hospitals present during the media interaction at CMO Office, Dimapur, shared two more stories where such allegations were made against doctors, health workers and hospitals and one-sided stories were presented and according to Dr Victo Wotsa, President of Nagaland Private Doctors’ Association, the saddest part is people believe in these stories.
In one of the stories, allegations were made against a hospital that they handed over a deceased to their family without properly sealing the body even though the person had tested positive. A doctor of the hospital clarified during the interaction that that person was brought to the hospital under critical conditions and since he was showing symptoms of Coronavirus, his sample was sent for testing. However, he expired before the result could arrive. While his body was being prepared for discharge, the result came and it was positive. The family members of the deceased were quickly made aware of the result, but according to the doctor they refused to have the body properly sealed, questioned the motive of the doctors, and took it away.
“We can’t just hijack the body”, she said.
Dr Angami said that labelling doctors as “crooks” is a great disservice and the social media is breaking the trust of people in the doctors and hospitals and it is a lose-lose situation for all.
When questioned why the hospitals don’t use social media to clarify doubts or counter allegations made by YouTubers and social media users, he said that social media is a “mad place” and countering the allegations there will only worsen things.
Trying to clear the confusion that people have around COVID tests and a perception that has been created that doctors are manufacturing positive test results, he said that contrary to what many think, doctors actually prefer to treat non-COVID patients and tests are being done to make sure that no positive case is erroneously handled as “lives have been lost” and a negative report gives the doctors relief.

He explained that RT-PCR tests take a long time to give results and cannot be used during emergencies, TrueNAT and CBNAAT tests takes comparatively less time, but still needs a considerate time, which is why Rapid AntiGen Tests (RAT) are done in emergency as they give results the quickest, however, the RAT tests that are being done to detect Coronavirus is done at “non-specific” mode as “specific” mode has high sensitivity and has the potential to give false positives. The disadvantage of doing the tests in “non-specific” mode is that though it avoids giving false positives, it also has a near 50% probability of giving false negatives and that is why if someone has high index of suspicion, repeated tests are done or asked to do. However, if RAT gives a positive result, the patient doesn’t need a repeated test as per the direction of ICMR.
He cleared that when someone dies, the family is entitled to have a death certificate, a death summary, and an investigation report and added that the allegations some make that they are not given “medical records” are not true and the hospital records can only be accessed by a Magistrate if they are asked for.
He advocated the need of an “impartial group” at this juncture to address the grievances of the people if any and mentioned that DC, Dimapur, has been apprised about it verbally and a written proposal will be submitted soon.
CMO, Dimapur, Dr I Moatemjen, on the occasion, also assured the setting up of a redressed cell and said that while the rest of the Departments were under lockdown, the Medical Department worked 24/7 under lots of stress making many sacrifices, yet he comes across news that puts the Department and people associated with it in bad light.
He said that people put everything on social media and instead of facts, one-sided stories are represented. During his address, he also gave the latest COVID statistics of the district in which he mentioned that most of the new positive cases in the district are those who are yet to take the vaccines and among the persons dying with co-morbidities, the highest numbers are diabetics and people with hypertension.
(Page News Service)