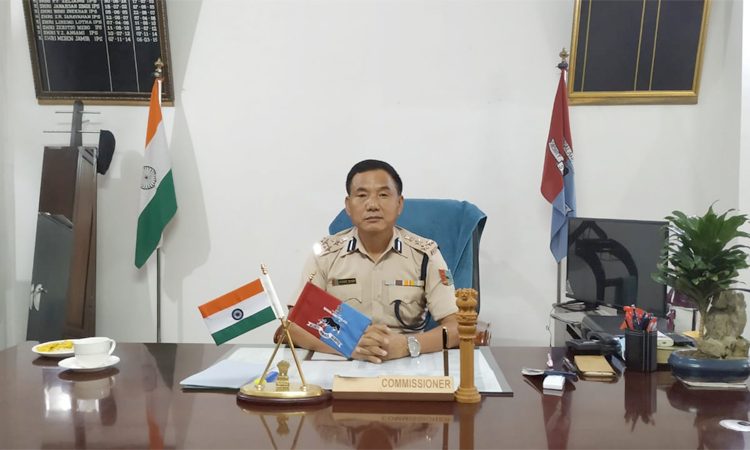 DIMAPUR, OCTOBER 23: A day after ACAUT Nagaland ‘strongly condemned the forced closure of East India Transport Agency’ in Dimapur, run by two Naga lady entrepreneurs, Dimapur Commissioner of Police Rothihu Tetseo IPS on Friday informed the media fraternity that when a team of police reached the agency, it was found to be in operation, nevertheless, 24/7 security has been provided to the agency.
Briefing on a number of issues related to crime in the district here at the office of the Commissioner of Police, Dimapur, the Commissioner of Police mentioned that 3 persons are in judicial custody relating to the death of Jiten Gogoi, a resident of Dhemaji in Assam, who was shot dead near the IMC Hall on September 22 and escorts are now being provided to the inbound trucks carrying essential commodities.
Providing updates on the case relating to the raid of a liquor manufacturing unit by the security forces on September 2, Tetseo informed that till now 4 persons have been arrested while the interrogation of one more is awaited as the person is outside the country though summon has been issued.
Calling the yet to be interrogated person a ‘prime suspect’, the Commissioner of Police, however, maintained that it is not the case of absconding as he has been stuck due to the pandemic and only after his statements are taken that the case will have a clear perspective.
Meanwhile, giving brief statistics about the extortion cases dealt by the police in the district since January 1, 2020, he informed that till now, the total number of cases registered by the police is 78 and 127 persons have been arrested. Of the total arrested, 60 belong to the different UGs.
Further, the police recovered 58 arms, 3484 rounds of ammunitions, Rs 1,62,90,890 in cash, 4 grenades, 2 PEK explosives, and 9 detonators.
In the last one week, 2 persons namely Hanso Quinker and Hevikhu Achumi were arrested. Quinker was arrested from 4th Mile on charges of extorting money in the name of NSCN K-Khango. From Quinker Rs 4,400 and ‘Work Permit’ of NSCN K were seized while from Hevikhu, who was arrested at Burma Camp, ‘Work Permit’ (7) and ‘Non-Local ID Card’ (1) were seized.
From January 1 till today, the police has also seized 46,114 bottles of IMFL, 343 Kgs of ganja, 1,36,000 ‘world is your tabs’, 1 kg 890 gms heroin, 210 SP capsules, and 2,926 bottles of codeine cough syrups.
In the past week alone, 3 persons namely Vishal Thapa, Mohit Kumar Singh and Akato Chophi were arrested and 200 bottles of IMFL were found in their possession and 6 Kgs of ganja was recovered from one Ranodhir Ghosh.
During the interaction, the Commissioner also talked about the recent incident where 4 people were arrested for staging Rs 20 lakhs robbery and cautioned the employees that before they employ someone they should check their police records and make proper investigation from their communities or cases like this will continue to occur. He maintained that the case is still under investigation.
(Page News Service)