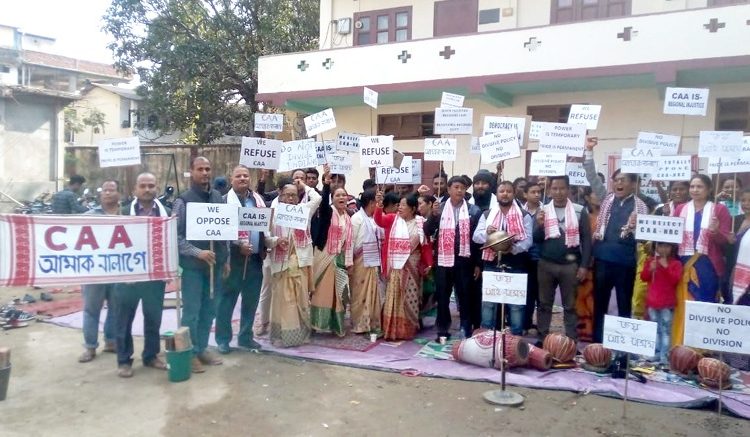 Dimapur, December 23: The Dimapur Assamese Samaj organized a protest against the passage of the Citizenship Amendment Act, 2019 at its Namghar Campus, near Fire Brigade station, Dimapur. The protest was attended by Assamese community representing various religious communities and tribes.
The larger Assamese communities from upper and lower Assam including Barak valley residing in Dimapur came out in large numbers to protest against the “draconian and discriminatory” Citizenship Amendment Act, 2019 (CAA) passed by the parliament.
Speaking to Nagaland Page, secretary of Dimapur Namghar Trust, Deep Borkotoky expressed deep resentment against the CAA, saying the Act is discriminatory and it violates the basic features of the constitution.
“Assam is an underdeveloped state and we are even unable to give proper education and jobs to our children and upon such grim situations how can we say yes to dumping of Bangladeshi Hindus who are in crores at present. We will be reduced to a minority, even if the sixth schedule is implemented for the protection of the state,” he said.
Deep Borkotoky said the impartiality of the central government towards the Assamese people is such that when the rest of India was given 1971 as the cut off year, why for Assam 2014 was set as the cutoff date. “Why not 1971,” he said adding the Assamese society will not allow it to be implemented.
“Why the burden only on north eastern states, particularly Assam? Why not equally divide the Bangladeshi Hindu migrants to all the states,?” Deep asked.
“The Assamese community in Assam and here at Dimapur are protesting against the bill not on religious grounds but to preserve our land, culture and language, because the dumping of innumerable numbers of Bangladeshi migrants through Citizenship Amendment Act, 2019 will destroy our culture and heritage and we shall not allow it to happen,” remarked Mukibur Rahman, who also spoke on the occasion.
Mukibur Rahman, a youth leader from the Assamese community of Dimapur with a placard in one hand was voicing out, ‘Go back CAA’, ‘Go back CAA’ and the protestors seated at the venue including women and aged were chanting Assamese folk songs and breaking out now and then in the midst of the song with the slogan “Go back CAA’, “Go back CAA”.
Deep Borkotoky endorsing the comment of Mukibur Rahman said, “Assamese language has no religious difference and it is spoken by all the communities of Assam including the Muslims and we are jointly protesting against the CAA and our protests will continue. He added that the entire Assamese community will be observing black day on Magh Bihu, the festive seasons of the Assamese communities.
“We will be protesting on a peaceful note,” he said and invited all the people of Assam settled in Nagaland to join the protest movement against the CAA. He also advised all protestors to desist from any violent activity because the very idea of protests loses it purpose. (Page News Service)