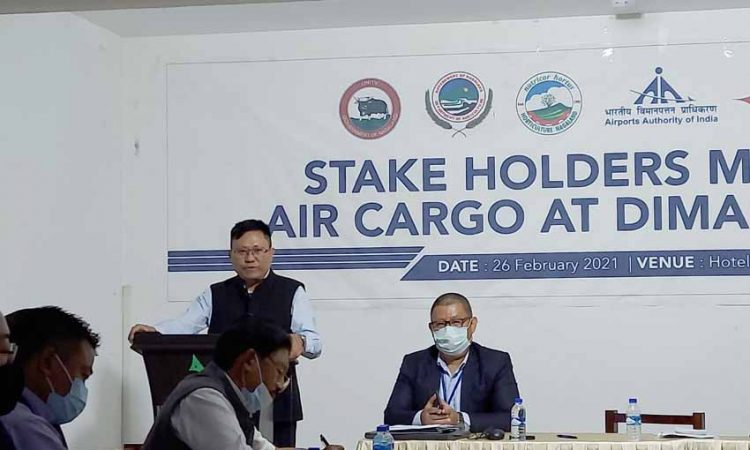 Delivering the keynote address during the stakeholders meet on air cargo at Hotel Saramati here, Zhimo stated that air cargo may represent point one (.1) or point two (.2) percent of the cargo, but in terms of value it is much higher. He said in India air cargo is permitted only through Common User Domestic Cargo Terminal (CUDCT) and informed that Dimapur Airport has also constructed the terminal.
However, he said due to the pandemic, the terminal could not be operationalized as all equipments including X-Ray machines, scanners could not be installed.
Zhimo further informed that the permission to start air cargo from Dimapur Airport was received on February 22 last from Bureau of Civil Aviation Security. He said the air cargo process will begin from the present terminal building.
“This is first time anywhere in India, where permission has been granted to operate air cargo from terminal building,” he said.
Later, providing more inputs on behalf of Nazeer A S Basha, DGM Cargo, NER, AAI, Zhimo said Departure Control System (DCS) has approved the Standard Operating Procedure (SOP), which would be given to the Departments of Horticulture and Agriculture, Airlines, CISF.
Explaining the process of sending cargo, the Airport Director said the processing of cargo has to take four hours ahead of the actual departure of the flight.
“Cargo should be brought four hours before the departure time,” he informed the stakeholders present.
He said unlike other airports of the country, Dimapur Airport has to have targeted items since there space for storing the items, which would mostly comprise of perishable agri and horticulture goods. He said the items would be brought and sent on the same day.
He also said that the cargo would not directly report inside the airport but at the separate cargo building, which has been constructed already.
About the application charges, he said it would be processed through the concerned airlines.
In his special address, Agriculture Production Commissioner Nagaland, Y Kikheto Sema IAS said that 2020-21 has been very important year for the state Government, not because of Covid pandemic but for two other reasons. He said after 57 years, Nagaland was able to set up Soil Testing laboratories in 12 districts and 72 blocks and secondly, the state Government got clearance from Government of India, Ministry of Civil Aviation for starting air cargo from Dimapur Airport.
Stating that there is no scope of other industries in Nagaland, the APC said the only hope is in agri and allied activities as the state is blessed with various agro-climatic zones.
However, he said there is a hindrance of land holding system and practice of traditional or primitive farming. He said traditional farming is no longer economically viable or ecological sustainable.
“We can’t stop traditional farming in Nagaland as they are related to the traditions and culture of the people. We cannot stop also as all the festivals, folklores and folksongs will have no meaning without it,” he said and lamented that forest area has been decreasing rapidly as the population is increasing.

Explaining the benefits of agriculture, horticulture and other farm products, he asked whether the farmers are ready to shift from their traditional methods of cultivation to a new model. He said to increase production and quality, the department has been stressing on “Naga Model Integrated Settled Farming”, which he said will bring all forms of agriculture and horticulture in one platform.
He also said that there is huge market for agro/horticulture products.
(Page News Service)