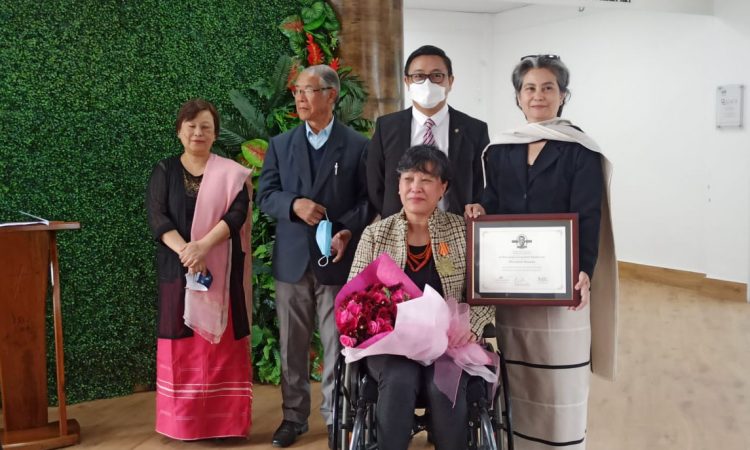 KOHIMA, NOVEMBER 30: The Chairperson of State Commissioner for Persons with Disabilities (PwDs), Diethono Nakhro was conferred the annual A Kevichusa Citizenship Award by the Kevichusa Foundation at RCEMPA Hall, Kohima, on Monday.

Nakhro, who have been at the forefront of the Nagaland Disability Rights Movement for more than 10 years and has been working with other NGOs and DPOs, was awarded a certificate, a citation, a medallion and Rs. 3 lakhs by the Foundation for her advocacy and awareness efforts to promote the full inclusion of and participation of children and adults with disabilities in every aspect of the community.
In her acceptance speech, she said “So much of the world we live in is built on a “One-size-fits-all” approach, and there is this tacit understanding that those who do not fit in must get left behind. But what happens when we say this is unacceptable? We start to build a better world, that’s what happens!”
Disabled from the waist down in an accident in 2006 when she was Assistant Editor at Eastern Mirror, Nakhro narrated the moments where she had many question but no answers and as she worked her way to starting a new life only to be met with the reality ~ that it was going to be practically impossible to live any kind of life as a disabled person in Naga society. “I slowly started discovering all the negativity around disability, the misconceptions, lack of awareness, lack of facilities, services and so on and so forth,” she said.
She recounted that PwDs were literally invisible, their voices not being heard, disabled people were excluded and socially isolated. Sharing an instance of the things she started to see with her life confined to a wheelchair, she said most children with disabilities are unable to go to school, unable to get a full or proper education because of inaccessible school buildings, lack of accessible curriculum, lack of trained teachers and so on and that nobody was talking about it.
Nakhro said that there are so many stereotypes and negative attitudes attached to disability- it is seen as an abnormality, a tragedy, and a disabled life is often regarded as helpless and hopeless. People living with disabilities are more often than not viewed as objects of pity and charity, she added.
While putting on record that her life as a disabled person is very different from many other disabled people because she works and lives well above the poverty line with a secure home and great support system of her family, she maintained that many disabled people with disabilities are not so fortunate.
Disability does not necessarily mean poverty, but people with disabilities are more likely to face poverty than people without disabilities due to discrimination, limited access to education and employment and lack of inclusion in livelihood and other social programmes, she said.
At the same time, women with disabilities face double the discriminations and difficulties because of their gender and the obstacles they encounter because of their disability, Nakhro pointed out. And this places disabled women and girls at higher risk of gender-based violence, sexual abuse, neglect, and exploitation, particularly girls and women with psychosocial disabilities.
“For all the above and much more, we fight for inclusion and equal opportunities; we fight for social justice for all disabled people”, she said. “I am just one among many; there are many good people doing a lot of good things”, Nakhro added humbly.
“On the flipside, a lot of changes for the better have been happening in recent times: There is better disability awareness; steps are taken to improve accessibility, inclusive education is being taken much more seriously”, Nakhro said. Also, there are perceptible positive attitudes too and our Government is also much more receptive and proactive, she added.
While we celebrate every step forward however small it may be, the fact remains that we still have a very long way to go for we have ignored, excluded, isolated and neglected our citizens with disabilities for too long, she maintained. Stating that while positive strides are being made, Nakhro said PwDs continue to face almost insurmountable barriers in the most basic places like schools, hospitals, playgrounds, marketplaces and even in our churches. So much more needs to be done for Nagaland to become truly inclusive and enabling, she added.
Instituted in 2017, the Kevichusa Foundation is a charitable foundation which was founded by the descendants of A Kevichusa(1903-1990), Member of the Order of the British Empire. A Kevichusa, son of Rev. Nisier Angami of Khonoma Village, was the 2nd matriculate among the Nagas; the first Naga graduate; the first Naga officer and Magistrate in British India; Honorary Captain of the British Army; the first Naga IAS officer; founding member and first Chairman of the first regional party of Nagaland ~ the Democratic Party of Nagaland; a Member of Parliament (Lok Sabha); and one of the translators of the first Angami Bible.

Giving a brief overview of the annual A Kevichusa Citizenship Award (KCA), President KCA, Kethoser Kevichusa said that the reason for establishing the award was to celebrate and promote the ideal of citizenship. KCA will annually recognise an indigenous individual or a group from Nagaland who has consistently championed, demonstrated, and embodied the ideal of citizenship, and unwaveringly sought the common good of the people of Nagaland or collective sections and constituencies.
This year’s award was given away by Reverend Tsole Chase, Pastor of Khonoma Baptist Church and Dr. Kevilenuo Sakhrie, retired Associate Professor, Kohima College.
(Page News Service) 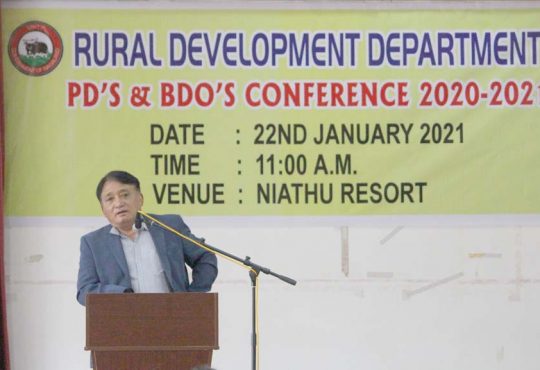 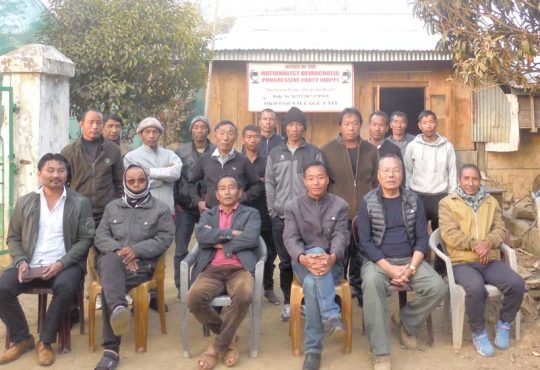 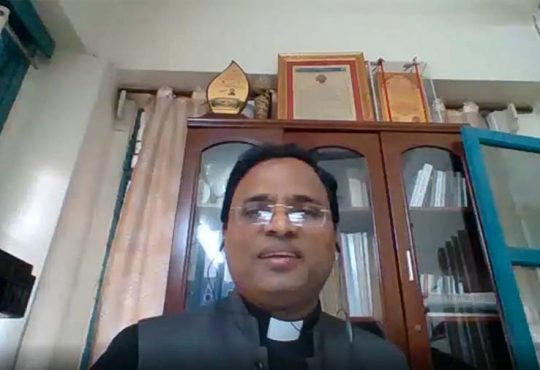