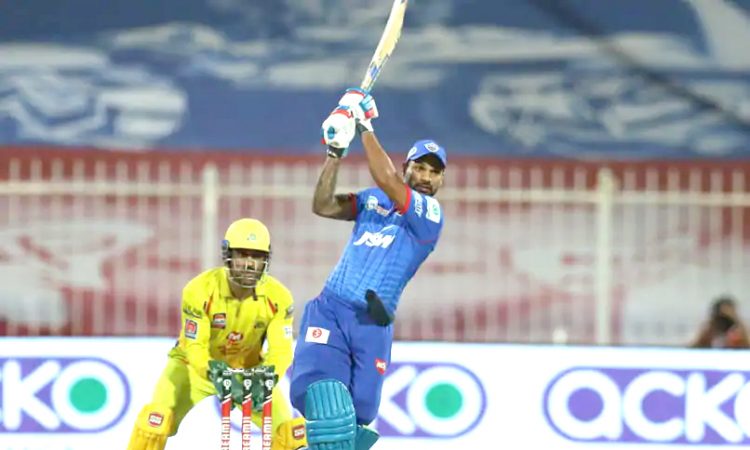 Sharjah, October 17: Delhi Capitals opener Shikhar Dhawan scored his maiden IPL century against three-time champions Chennai Super Kings at the Sharjah Cricket Stadium on Saturday. Dhawan reached his century off 57 balls by taking a single on the last delivery of the penultimate over. His knock was studded with 14 fours and one hit over the fence. Apart from his brilliant piece of batting, Dhawan also got support from his opposition players who dropped four catches. Chasing a target of 180, Dhawan lost his opening partner Prithvi Shaw on the second ball who got out caught and bowled by Deepak Chahar. Ajinkya Rahane failed with the bat in third successive match, leaving Delhi Capitals in a state of bother.
However, Dhawan, who has been in tremendous form in the last few games, embraced the challenge and stitched a solid 68-run stand with skipper Shreyas Iyer to bail his side out of trouble.
Dhawan struck a gorgeous boundary and a massive six straight over Sam Curran’s head, taking his total to 91 in the 17th over. However, there were no sign of nerves at all and he smashed a boundary in the next over to reach the highest score of his IPL career.
With just one-short of his magical three-figure mark, Dhawan was adjudged caught behind, after he missed a slog-sweep against Sam Curran, by the on-field umpire but he made good use of the technology and challenged the decision straightaway.
The replay showed there was no contact between the bat and the ball and the on-field umpire had to reverse his original decision.
He took a single on the last ball to complete his maiden IPL century and most importantly retain the strike for the last over.
Dhoni’s gamble to bowl the last six balls by Ravindra Jadeja didn’t pay off as Axar Patel took him to the cleaners, smashing three huge sixes to seal the win for his side.
With the win, Delhi Capitals displaced Mumbai Indians from the top of the points table, after registering their seventh win of the season. (Agencies)