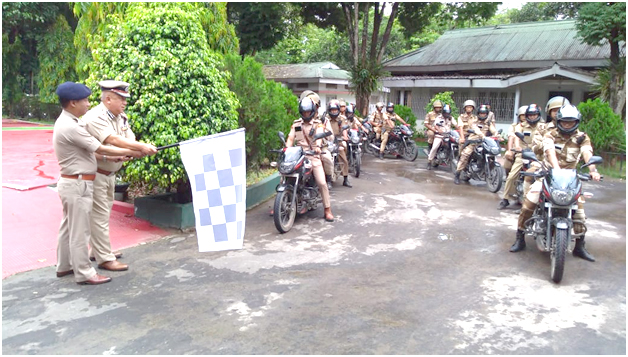 Dimapur, June 15: DGP Nagaland, T John Longkumer today flagged off the PHQ’s latest initiative to digitally monitor and store patrolling data using GPS, software and mobile technologies with an intention to solve the problem of monitoring multiple patrolling units with a secure foolproof system here at Rhododendron Hall, Chumukedima.
With the ‘e-Patrol’ app, developed in partnership with Ramietech Solutions, the movement of the patrolling units will now be monitored digitally via secured and encrypted QR codes that are installed at different patrolling points within specific police stations’ jurisdictions, laced with GPS provision for exact coordinates.
The members of the patrolling units will have to scan the QR codes through the app once they reach a particular point during patrolling, which will register their movements in real time. The app also comes with a face-recognition technology, which eliminates the possibility of proxies.
Also launching the dynamic and interactive official website of Nagaland Police (police.nagaland.gov.in), which replaces the previously static website, Longkumer said on the occasion that in a rapidly evolving world of technologies, police need to adapt to the changing scenarios and in that direction the Nagaland Police has been working to upgrade its digital footprints.
He said that the new digital initiatives are steps taken towards transparency and there are more to come. He cautioned that machines don’t decide the success but it is the people who handle the technologies do and asked the police force to be credible one on which the people of Nagaland can be proud of.
Talking about the website more, he said that multiple languages are supported by the website which includes Hindi, Bengali, English, and it meets the guidelines of the Government of India and international standard.
Previously, giving a detailed presentation about the app and web-based monitoring dashboard, a representative from Ramietech Solutions said that this will instill enforced responsibility in patrolling units by ensuring foolproof mechanisms within the app and will lead to a better beat patrolling coverage at ward level, village level, block level, district level, etc.
Further, this will facilitate generation of reliable and robust reports for key decision-makers as well as boost Nagaland Police efforts to modernize its policing system in line with various digital initiatives kick started at the state and national levels.
Later, a training programme on ‘Cyber Crime’ was also organized.
Longkumer in his speech had mentioned that the police has set up a social media cell under Sonia Singh, IPS, IGP (Range) to deal at a quicker rate with the fake news and messages that might create disharmony amongst the different sections of the society and stressed on the importance of a closer police-public relationship.
(Page News Service)