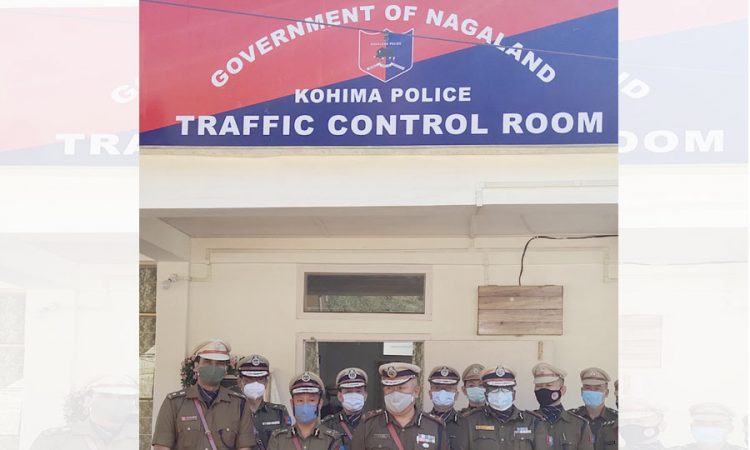 Located Opposite SKV Petrol Pump in a plinth area of 5,450 square feet, the 3-storied Traffic Control Room has a total of 22 rooms. It also has residential flats for Traffic personnel and also used as Traffic Control Office for In-charge, DSP Traffic, Assistant booth and Computer Room. It was constructed at a cost of Rs 1.12 crore funded by HUDCO.
Speaking on the occasion, DGP John Longkumer said over the years there has been a steep rise in the number of vehicles in Nagaland and more so in Kohima while the roads remain the same consequently traffic congestion and traffic related problems have only increased.
This problem is further compounded by flouting of traffic rules and basic norms of civic responsibilities, he said.
Hence, the DGP said the Traffic Control Room and the Kohima Police Traffic Sentinel Programme are the response of the Kohima Police to this critical situation. “They are the embodiment of technology applied with conscience,” he said.
The Traffic Control Room, he said, is envisaged to be the application of technology to solve the problems of supervision and coordinate the efforts of Traffic Police personnel all over Kohima town, he said.
It will use cutting edge technology in Google maps, CCTV, cameras, drones and FM Radio to increase the response speed of personnel on the job.
He said FM channel of AIR Kohima will be used to disseminate advisories and warnings to the public to avoid congested routes thus increasing the outreach of traffic personnel, he said.
About the Sentinel programme, he said, it would be the soul of the Traffic control measure as it would empower the public/citizenry to come forward as conscientious and law-abiding people to strengthen the arms of law.
He was also hopeful that the Sentinel scheme would usher in new age police-public cooperation and help build a community, which is law abiding and proactive in protecting citizens’ rights.
These 2 programmes, Longkumer said proves that the police are now ready to synergize their efforts and come up with the best reply.
The DGP further encouraged every police unit to come up with such programmes that would benefit the public and enhance the capabilities of police at fulfilling the charter.
SP, Kohima, Manoj Kumar, in his opening remarks, informed that the Traffic Control Room with enhanced modern technology to monitor and manage traffic in Kohima town will be commanded by UBI Vikuto Wotsa as i/c, ASI Khihilo Rengma as 2 i/c and 10 other officers. It has 4 units – Traffic Monitoring, Technical Support, Police Radio and Traffic sentinel Control unit.
Altogether 22 CCTV cameras have been installed in 7 locations within Kohima town and live feed from all the cameras are centralized at the Traffic Control Room, he said.
The traffic monitoring unit will monitor the flow of traffic, identify any traffic violation and take assistance of the footage in investigation of road accidents and general crime, he said.
Live traffic updates will be disseminated periodically by the Technical Support Unit through 103 MHZ FM Tragopan Radio and the Kohima Police Twitter and Facebook handles.
He went on to state that through the Traffic Sentinel Scheme, citizens would be invited to register with Kohima Traffic Police as ‘Traffic Sentinel’ and report certain traffic violations via photos and videos through WhatsApp, which would later be upgraded to Mobile App facility.

To encourage the sentinels, we will ensure their safety and security by keeping their identity confidential, he asserted, adding that cash and special rewards would also be handed over through a systematic method of points rewarded per violations reported by the sentinel.
Besides, he said the Kohima Police would be using the service of dedicated and willing sentinels in creating awareness about traffic laws and road safety.
DSP (Traffic) Kohima, Manom Wallim, chaired the inaugural programme while SDPO (South) Vitoshe K Sumi delivered the vote of thanks.
(Page News Service)