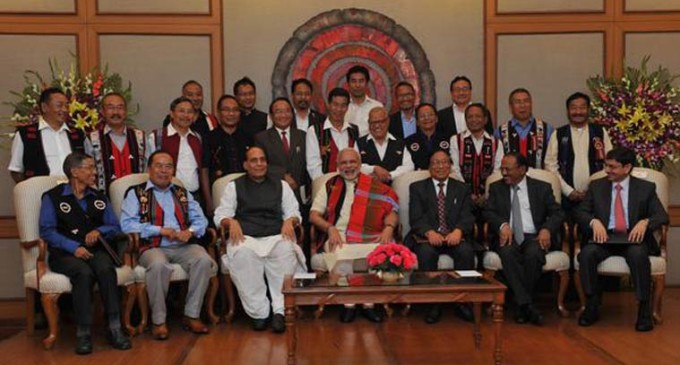 On August 3, 2015, at the signing ceremony of an “historic” agreement for peace with National Socialist Council of Nagalim (NSCN-Isak Muivah), Prime Minister Narendra Modi said effusively that the document was “a shining example of what we can achieve when we deal with each other in a spirit of equality and respect, trust and confidence”.

Less than two years after he spoke of “trust”, the phone numbers of several top leaders of the NSCN (IM) were added to a list of numbers of persons of interest believed to be generated by an Indian client of an Israeli spyware company, The Wire can confirm.
The leaked database that forms the basis of the Pegasus Project comprising thousands of numbers and accessed by the French media non-profit Forbidden Stories contains some that were successfully targeted with Pegasus, a military-grade surveillance tool that involves hacking a smartphone to compromise its contents.
In the aftermath of the August 2015 framework agreement, which is intended to resolve the 6-decade-old Naga political issue, the NSCN (IM) has been in talks with the Modi Government to flesh out the details of a final settlement.
The NSCN (IM) fought an insurgency against the Indian Government for decades before announcing a ceasefire in 1997.
Among the top leaders of the NSCN (IM) whose phone numbers have been found in the leaked database are that of Atem Vashum, Apam Muivah, Anthony Shimray and Phunthing Shimrang.
The NSO group has disputed the authenticity of the list, saying it has nothing to do with the company or its clients.
But the Pegasus Project consortium has reason to believe the list includes people who are persons of interest to NSO clients, even though the mere presence of their number does not indicate that their phone has been targeted or infected by spyware. That is only possible to establish through a technical examination of a device’s data. Digital forensic analysis conducted on a small-cross section of the numbers on the list has revealed signs of either attempted hacking or successful compromise through Pegasus spyware.

The leaked records also shows that N Kitovi Zhimomi, convenor of the Naga National Political Groups (NNPGs), with which the Modi Government is also in parleys to find ‘one solution’ to the Naga issue since end 2017, was selected as a possible candidate for surveillance towards the end of 2017.
As per the leaked data, while the phone number used by Atem Vashum ~ widely considered to be the successor of the Th. Muivah, the chairman of the NSCN (I-M) ~ attracted interest in mid 2017, that of Muivah’s nephew Apam Muivah was added shortly thereafter.
Two phone numbers of Anthony Ningkhang Shimray, the commander in chief of the Naga Army of NSCN (IM), also appear in the leaked records in late 2017.
The phone number of Phunthing Shimrang, the former commander in chief of the NSCN (I-M)’s Naga Army, and that of the NNPG convener, N Kitovi Zhimomi, appear later, towards the first half of 2019.
A closer look at these timing of these selections provides useful insights into the negotiation process that the Centre has had with Naga leaders.
The numbers present on the leaked list were added from mid-2017 onwards. The phone numbers of Atem, Anthony and Apam ~ three key representatives of the outfit in talks with the Government ~ feature in the leaked database from that year onwards, till the time the records end, which is mid-2019.
For Anthony Shimray, his selection as a possible candidate for surveillance comes around the time he reportedly took over from Phunthing Shimrang as the new commander in chief of the NSCN (IM)’s ‘military operations’, presumably a notional position since the over two decades old ceasefire remains firmly in place.
While Atem and Apam joined the post-August 2015 agreement dialogue with the Union Government’s Interlocutor, RN Ravi, Anthony was in Tihar jail at the time. He had been arrested in Kathmandu in September 2010, allegedly for negotiating an arms deal with a Chinese company. The NIA charged him with gunrunning and attempting to wage war against India and he had remained in Tihar jail for 6 years since then.

On August 4, 2016 though, a special court of the National Investigating Agency (NIA) set Anthony free on bail to take part in the peace dialogue with the Modi Government. According to the Hindustan Times, Ravi “played a key role in securing bail for Shimray”.
According to a news report published on November 29, 2017, which mentioned a statement by NSCN (IM) announcing Shimray as the ‘longvibu’ or commander in chief of its army, he was “expected to take charge within a week”.
That may explain why two phone numbers used by Anthony Shimray appear on the list at the end of 2017.
The number of NNPG convenor N Kitovi Zhimomi appears on the list in mid-2019, at a time when he was playing a key role in the search for a the final terms of a settlement. Ravi, after his retirement from the Government ~ his formal post till then was Chairman of the Joint Intelligence Committee ~ continued as Interlocutor for the Naga talks but was also made Governor of Nagaland in July 2019. This essentially meant Ravi, who had to travel to Nagaland to meet various stakeholders, attracting media attention, could now be placed in the State itself (with constitutional powers) to engage in more casual and discreet parleys, and thereby speed up the peace process.
In finding a solution, the six NNPGs, roped in since end 2017, have turned out to be an important actor for the Centre even though Ravi, on behalf of the Government, had signed the Framework Agreement in 2015 only with the NSCN (IM).
Since the six NNPGs have roots in Nagaland ~ unlike the top leadership of the NSCN (I -M) which essentially comprises Tangkhul Nagas from Manipur ~ and there is a section of Nagas in Nagaland who feel those from the State must be heard too for a peace accord, the Government found the right platform in the NNPGs. Bringing the NNPGs to the negotiating table also helped send a message to Muivah and his men that NSCN (IM) were not the sole negotiator.
But bringing in one more set of negotiators for ‘one solution’ to the Naga issue helped create two differing opinions on the core demand of the NSCN (IM) – a separate flag and constitution.
With the support of the NNPGs, the Government seemed to have tried signing an accord by August 2019, which was presumably the reason Ravi might have also been placed in a constitutional position in the State in July 2019. An interview of Zhimomi to Nagaland Post in October 2019 is particularly indicative of it.
Zhimomi said in that conversation, “We (NNPGs) have prepared everything three months back. On our part, we have completed everything in the month of July. So we were expecting to sign the agreement before 15th August. Two months have passed without any reason, otherwise we could’ve signed before 15th August.”
In the interview, it was clear that Zhimomi was blaming the NSCN (IM) for the delay, because of their insistence on a separate flag and a constitution. Zhimomi said, “When the Government of India has clearly, time and again, stated that sovereign independence is not possible at this stage and mutual agreement is to conclude the issue through democratic process, now why are they talking about flag and constitution?”

Zhimomi also argued in that interview why the NNPGs were not just giving voice to Nagas from Nagaland but drawing a line of difference between them and those in neighbouring States. By essentially supporting the present demarcation of State boundaries, they were saying that a solution has to be found within those parameters.
The Centre gave a firm deadline to the stakeholders for signing the accord by October 31, 2019, reportedly “with or without NSCN (I-M) with the backing of the NNPGs.
It is, however, interesting to note that at a time when the NNPGs were in agreement with the Government’s position on the flag and constitution and were finalising the final draft for the agreement with Rabi, Zhimomi’s phone was listed as a potential target for surveillance.
Eventually, the NNPGs backed out from signing the agreement without the NSCN (IM) but the incident broke the trust of NSCN (I M) in Ravi. Muivah later wrote to Modi seeking a new Interlocutor. The talks have hit a roadblock since. It also pushed the NSCN (IM) to send back of its trusted men back to the jungle for any eventuality.
According to some news reports, both Phunthing and Apam left the country by end 2019. A News18 report from November 2019, quoting ‘a top commander of a Myanmar rebel group’ said, “Phunthing and his two comrades reached China via eastern Nagaland (Naga self administered areas in Myanmar) in the second half of October. The three leaders are trying to talk to the Chinese authorities for aid in their fight against India.”
The report, quoting the unnamed rebel leader also said, “NSCN-IM chief Anthony Shimray has also left the outfit’s headquarters camp in Hebron (in Nagaland) and is staying in an undisclosed location along the India-Myanmar border. More than 3,000 cadres of the IM faction have been were camping in the border areas since October (2019).”
(Courtesy: The Wire)