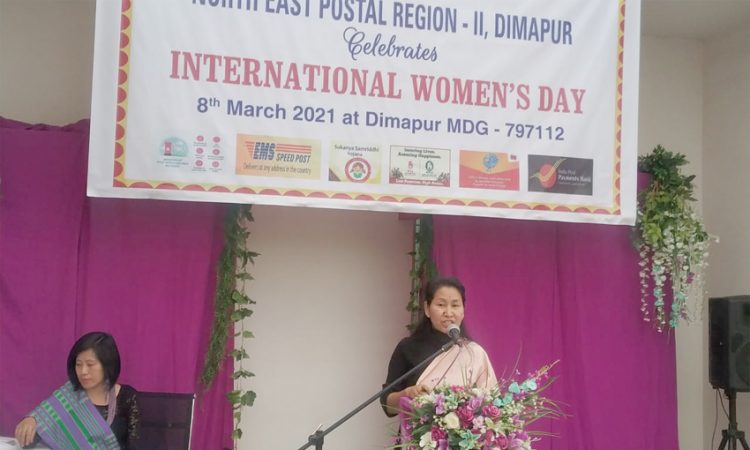 Delivering the welcome address, Victoria Angami from the Department of Post mentioned that it is a day to celebrate gender equality and achievements of women in our state and around the world.
Joshline Sangma gave a speech on the Department of Post Products. She talked about women empowerment through various products of Department of Posts. She said that women play an important role in our society and the whole family is dependent on women for its daily activities.
She said that women play various roles in a family by catering to everyone’s needs. She said that the life of a woman is hard, and she gets little or no appreciation at all.
So, in order to give recognition to women, the Department of Post in the year 2014 has declared two sub offices in Kohima as an all women Post Office where all the staff are women, whereas in Dimapur, she said that there are eight sub offices, out of which six are run by women smoothly.
She mentioned that it is a matter of great pride for the women in the society.
She said that women empowerment is important to make the nation economically reliable in the global front by making women economically independent.
She also said that the Department of Post has various small Saving Schemes and Insurance Plans through which one can invest wisely for the future. She said that these savings accounts are applicable to all individuals young and old where they can invest and save money.
Special Guest, K.Ela encouraged everyone to create more awareness about the Saving Schemes to help and motivate those in crisis. She talked about local level women on how to educate women and girls in different times in our society. She mentioned about the women helpline and children helpline, she said that it is to help women and girl children in distress all around India.
She encouraged every man and woman to contact and seek help when a woman or a girl child is in distress. She said that education is very important to empower women and to let them stand as a leader with the help of the implemented schemes by the government.
She highlighted the reality of women who stay at home to take care of the family. She said that as a social worker, she had encountered many women who were victims of domestic abuse and violence in their own home silently. She said that if a woman is not safe in her own home, she will not be safe anywhere. So, she appealed to everyone to let no women go through such a situation and be a victim of abuse and violence.
She said, “Women cannot stand alone, we need men to stand beside us as a protector and ambassador”. She advised men to protect and empower women, and encouraged them not to discriminate women just because she is one, but asked them to appreciate women without any gender discrimination.
She added that all the women are sisters without any distinction and discrimination, adding, women are not weak but rather equally strong as men, who stand strong even when she falls down.

“Women have the strength to rise up again and again,” she stressed.
She said, “It is not easy to be a woman but it is not impossible to be one. When men feel like they are being intimidated by women, he should not abuse and try to make the women fall but rather encourage and help each other.”
She further added that men and women should go stand beside each other for better development of the society.
(Page News Service)