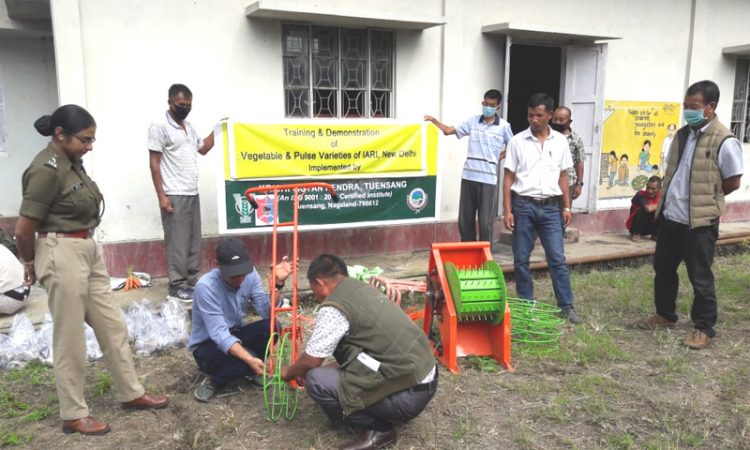 Tuensang, October 19: Noklak Police in collaboration with Krishi Vigyan Kendra (KVK) Tuensang organized a one day demonstration session on cultivation training at Village Guard Memorial Hall on October 16 at New Pangsha, Noklak.
Under the initiatives of Dr. Pritpal Kaur, Superintendent of Police, Noklak, 70 farmers were covered during the session. Dr. Shisarenla Aier and Yanger. I. Kichu (KVK) were the resource persons.
In a short speech Dr. Kaur expressed the need to improve agricultural technology to increase livelihood, earning, economy, value addition and scientific cultivation. Stating that farmers are the backbone of the society, she said, “I want Noklak to be the best district. With so many talented people, we should be number one in every positive sphere.”
Dr. Shisarenla Aier illustrated on the production technology of winter vegetables to the farmers. She also distributed winter vegetable seeds and farming equipments under NEH, IARI programmes.
Dr. Aier handed over a wheel hoe from the Department of Horticulture to L Lupai, chairman of DAN village, Noklak.
Method demonstration on nursery raising techniques of vegetable crops such as carrot, onion, spinach, beans, pulses and mustard seeds was conducted by Yanger I Kichu, Farm Manager, KVK.
Under this social initiative, the organizers have stretched its hands towards agricultural development in one of the remotest places in the State. The indo-Myanmar border village got its first one of a kind practical training, which would help the farmers enhance their cultivation and economy.
The program was chaired by Mongtei Khiamniungan, SI Noklak Police. Invocation was pronounced by Pastor Tsuno, New Pangsha Baptist Church. There was an open floor for questions and answers where the participants raised their queries, followed by vote of thanks by Shingnya, Village Council Chairman, New Pangsha. The session concluded with a benediction by Moun, Women Associate Pastor, New Pangsha Baptist Church. (Page News Service)