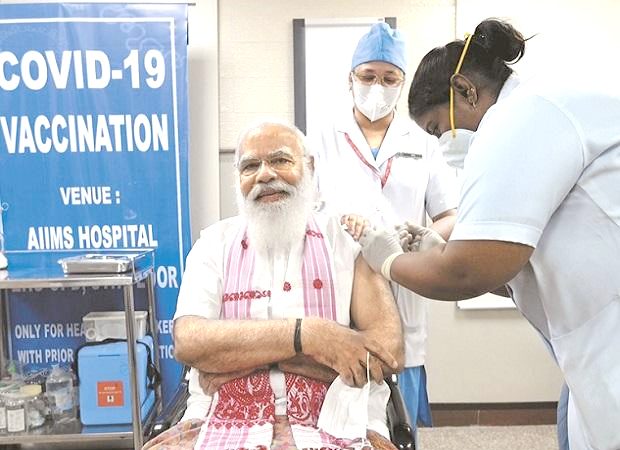 New Delhi, March 2: A day after Prime Minister Narendra Modi took his first shot of the COVID-19 vaccine, 70-year-old Mukesh Sehgal underwent the process at the Delhi Heart and Lung Institute here on Tuesday and said the PM’s move encouraged him to get inoculated against the viral disease.

Sehgal did not inform his family members about his decision to get vaccinated. However, soon after taking the first dose of COVAXIN, he sent out a WhatsApp message, informing them about it.
Under observation for half-and-hour after being administered the first dose of the vaccine, Sehgal said he was feeling well and relaxed.
Asked what encouraged him to go for vaccination, he said, “Yesterday, when Modiji took the vaccine shot, it encouraged me and boosted my confidence.”
Asked if his wife is also ready to get herself vaccinated against COVID-19, Sehgal, a resident of Vijay Nagar, said, “It is very difficult to convince a wife. In fact, I did not tell anyone from my family about it. But I encourage all my family members to get vaccinated now as I have taken my first dose.”
A resident of New Rajinder Nagar, Kamini Soni (69), who took her first vaccine shot after her husband, said they had no apprehensions about taking the jab.
“We desperately waited for the vaccine to arrive and when our prime minister, who is a role model for us, took the shot, we were totally assured,” she said.
Sunil Rustagi (61), a resident of Sarai Rohila, said he consulted a doctor at the AIIMS on Monday before registering for the vaccination and felt confident to go ahead as the prime minister himself took the first dose of the vaccine.
Two weeks before Diwali last year, Rustagi and his wife got infected with the deadly coronavirus. Both were in home quarantine and got infected in spite of taking all precautions, he recalled while under observation after taking the jab.
“I got infected first and then my wife. I had fever only for three days, but my wife had a real tough time. She had fever for 10-12 days. It was a difficult time. My wife will also take her first vaccine shot probably on Saturday,” Rustagi said.
Ram Kumar (33), a Delhi Police personnel attached with the Battalion 4, came to the Delhi Heart and Lung Institute for his monthly heart checkup, but eager to get himself vaccinated against COVID-19, he consulted his doctor on getting the first dose as he underwent angioplasty in December last year.
Kumar said on December 23, he was working out on the police ground in the Kingsway Camp when he suddenly felt chest pain and rode his motorcycle to the hospital. After tests, he was shocked when doctors told him he had a 95-per cent blockage in his heart and was suggested angioplasty immediately.
On January 23, when he received a message from his department about his vaccination against COVID-19, he went to a hospital near his residence, but the doctor was not sure if Kumar should take the risk of getting vaccinated as he had recently undergone a heart surgery and was already on medication.
Kumar decided to put it on hold. However, when he saw his colleagues, who were above 50 years of age and were heart patients, getting vaccinated, it instilled confidence in him. On Tuesday, he went ahead with the vaccination after his doctor gave him the green signal.
Asked if he felt any kind of uneasiness after taking the jab, Kumar said, “It went off smoothly. I feel normal and relaxed. In fact, as soon as my observation period ends, I would rush to the OPD for my checkup. As I am in a profession that requires me to be active and alert all the time, it is wise that I take the vaccine shots on time. Fortunately, I never got infected with the virus, despite being on duty during that phase.” (PTI)