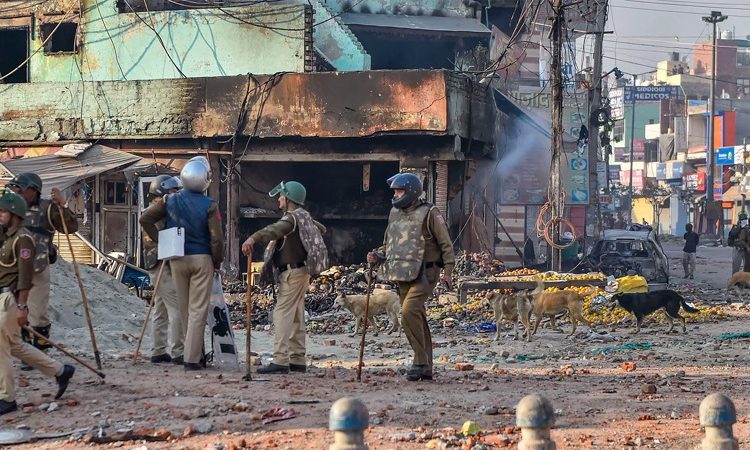 New Delhi, February 27: The death toll in Delhi’s worst riots in more than three decades climbed to 38 on Thursday as the violence ebbed but did not subside completely and thousands of people began picking up the pieces of their shattered lives and livelihoods.
Four days after communal clashes that began in northeast Delhi over the amended citizenship law and spiralled into bloodshed, arson and looting, the body of a man was found in a drain in Johri Enclave and there were scattered incidents of vehicles and shops being set on fire in Maujpur, Bhajanpura and other areas.
While there was no precise figure for the number of arrests, Solicitor General Tushar Mehta told the Delhi High Court that 48 FIRs were lodged in relation to the violence.
Delhi Police transferred the riots probe to the Crime Branch and formed two Special Investigation Teams.
The GTB Hospital in Dilshad Garden, where many of the 200 injured in the riots that broke out on Monday are being treated and where scores of people lined up outside the mortuary to claim the bodies of their loved ones, recorded five more deaths.
Eleven more deaths were reported on Thursday, taking the total death toll to 38, a senior Delhi Health Department official told PTI.
The opposition Congress took the issue to the Rashtrapati Bhavan.
Accusing Home Minister Amit Shah of ‘abdication of duty’, a Congress delegation led by party chief Sonia Gandhi urged President Ram Nath Kovind to call for his resignation and remind the Centre of its ‘raj dharma’.
“The situation is returning to normal. We are here to reassure people that we are with them,” newly appointed Special Commissioner S N Shrivastava, who visited the affected areas, told reporters.
Battle scarred and desolate with scorched, blackened walls, the ashen remains of vehicles, glass shards and bricks, several fires still burnt in the mostly mixed neighbourhoods of the national capital’s northeastern edge.
Shops, pharmacies and other establishments were closed and people stayed indoors unless it was imperative to step out.
Several families were seen leaving with whatever they could salvage from their vandalised homes.
As they tried to come to terms with the losses to their shops, workshops and in some cases fruit and vegetable carts, residents recounted the violence of the night before.
In Yamuna Vihar, three to four rioters came around 4 am on Thursday to burn vehicles.
“One of them was holding a bucket in his hand. He started pouring some liquid on three vehicles. One of the cars caught fire. We raised an alarm after which they fled,” a local told PTI, saying groups of people in the neighbourhood stay up all night to keep watch.
A few kilometres away, a charred board at a private school in Brijpuri read, “Welcome to a very happy school.”
The 52-year-old Arun Modern Senior Secondary School looks no less than a cemetery, said an official, looking around at the damage which he estimated to be over Rs 70 lakh.
The GTB Hospital also presented a picture of despair with some sobbing uncontrollably and others maintaining a stoic silence with barely held back tears as they waited at the hospital to receive the bodies of those killed in the communal mayhem.
Delhi Chief Minister Arvind Kejriwal announced his government will give Rs 10 lakh to the families of those who lost their lives and those seriously injured will get Rs 2 lakh.
He also said the government will bear the cost of the treatment of those injured in the violence and admitted to private hospitals.
Asked about the alleged involvement of his Aam Aadmi Party (AAP) councillor Tahir Hussain in the riots, Kejriwal said, “If those involved in the riots are found to be from the AAP, give them double punishment.”
Hussain has denied any involvement in the riots or the killing of an Intelligence Bureau staffer Ankit Sharma whose family accused him of being behind the murder, saying they are ‘baseless accusations’.
Police later registered an FIR against Hussain on a complaint by Sharma’s father.(PTI)