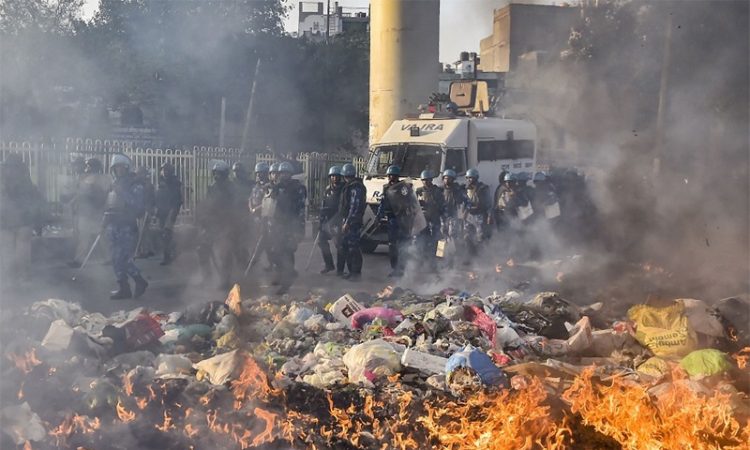 New Delhi, February 25: Fresh violence over the contentious Citizenship Amendment Act wracked northeast Delhi again, killing at least eight more people on Tuesday, taking the total number of deaths to 13. Violence cut a swathe through several localities, including Chand Bagh and Bhajanpura, with stones and other missiles hurled and shops set ablaze.
The Delhi Police have issued a shoot-at-sight order in the riot-hit areas. In the announcement, the police said that a curfew has been imposed in four areas of the northeast district of Delhi.
Police said 11 FIRs have been registered in connection with the violence and that the force is responding to incidents involving anti-social elements.
“Situation in northeast Delhi is under control, even as several parts of the area continued to reel under violence,” said Delhi Police spokesperson Mandeep Singh Randhawa. He said only one person has been arrested though over 20 people have been detained.
Delhi Police officer Rattan Lal was among the five people who lost their lives in the clashes on Monday. Lal (42), a head constable attached to the office of the ACP Gokalpuri, took a bullet to his left shoulder and it was recovered during the procedure from his right shoulder. It was earlier reported that Lal died from injuries sustained in stone-pelting in Gokalpuri.
Randhawa evaded question on whether action will be taken against BJP leader Kapil Mishra who is accused of making provocative statements.
“All these things are under investigation. We will investigate and take action against conspirators,” he said.
“We are responding to stray incidents of violence. Sufficient force has been deployed in northeast Delhi. RAF, SSB and CRPF have also been deployed. The MHA has given us additional force and we are deploying it,” he further said.
Though the violence continued unabated, police officials said the situation was under control and flag marches were conducted in Bhajanpura, Khajuri Khas and other places. Sixty-seven companies of police and paramilitary personnel have been deployed across the area.
Several media persons have also been injured as they were targetted by the mob while reporting from the area. Akshay, a journalist with JK 24X7 News, received a bullet injury and was in a serious condition in hospital.
Schools to remain closed
Deputy Chief Minister Manish Sisodia said all private and government schools in violence affected northeast Delhi will continue to be closed on Wednesday. Sisodia, who is also the education minister of Delhi, said all internal examinations have been postponed by schools. The CBSE has postponed Class 10, 12 exams in northeast Delhi scheduled on Wednesday. However, exams will be held in the remaining areas as per schedule.
There are a total of 86 centres in northeast Delhi. While Class 10 students had English exam, Class 12 students had optional exams, including Web Application and Media. “The exam will be conducted in rest parts of Delhi as per earlier schedule. A fresh date for the exam in northeast Delhi will be announced shortly,” a CBSE official told PTI.
Chief Minister Arvind Kejriwal, who held a meeting with senior officials and MLAs of all parties to discuss the situation, asked people to refrain from violence and said all issues can be dealt with through dialogue.
Earlier Union Home Minister Amit Shah convened a meeting of Delhi’s LG Anil Baijal, Chief Minister Kejriwal and Commissioner of Police Amulya Patnaik. It was decided in the meeting to enhance police-MLA coordination in the national capital and also reactive peace committees with representatives of all sections of society, religions and eminent local citizens. (Agencies)