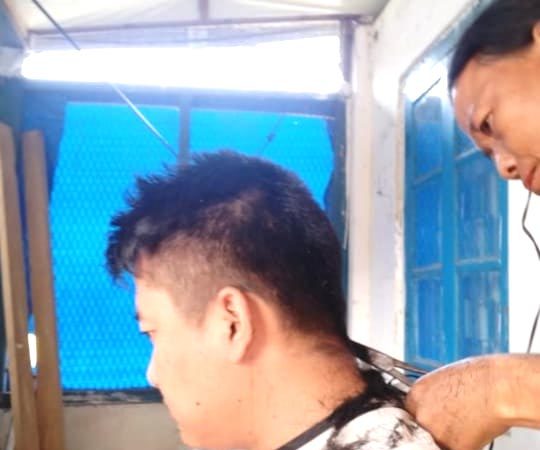 Page Staffer
DIMAPUR, NOVEMBER 22: In 2008, the village of Ungma, in Mokokchung district, got its first barber (haircutting) shop. It was a noteworthy moment on multiple counts – in Nagaland barbers are almost all non-Nagas, and all males. Lanulemla, the barber of Ungma, was not just a rare Naga plying this trade but also a female in a male-dominated profession, in a society which is deeply patriarchal.
In a village where almost everyone has a nickname, Lanulemla is better known as Ranula. And Ranula was no fancy hairstylist with a diploma; she was but a no-nonsense barber who did men’s hair as well as women’s. But the old and the young of Ungma flocked to her barber shop. Fast forward 12 years, Ranula is now mulling over opening a haircutting salon in Dimapur. Currently she plies her trade from her sister’s home in Dimapur. The lockdown brought about by the COVID-19 pandemic has sent many customers her way.
The Barber of Ungma
Hardships endured while growing had moulded Ranula’s intrepid character. Her parents were cultivators and even as a child she had to carry her own load; going to school would have meant one less pair of helping hands and so she had to forgo formal education. After her parents’ death, Ranula stayed with her sister and her son, enduring financial hardships. She cannot recall how she picked up the trade of haircutting but Ranula’s skill with the scissors and willingness to go home to home to give haircuts ensured that she earned whatever little to contribute to her family. A self-taught barber, Ranula said that she started her journey by cutting the hair of the kids in her neighborhood. She did not undergo any training and honed her skills on the job.
There was no guarantee of work though, and her income was irregular, and modest. After a few years of visiting houses in the village to ply her trade, she decided to start a shop of her own. With all that she had managed to save, Ranula purchased the bare minimum tools and accessories. Talking to Nagaland Page, she said, “I realized the need to find stable work than wait in anticipation for the next call I would get.”
In 2008, Ranula finally opened her own shop in the village in a 1-room facility costing Rs.300 as monthly rent.  “Since I was the first barber to open a shop in the village, and also a being a woman, I received a lot of appreciation and support from my fellow villagers who saw me in a different light,” she says. “During that time, I charged Rs. 15 per head for haircutting and I earned enough to pay the shop rent and save as well.”
The Barber of Ungma said that most of her customers, especially the young ones were happy with giving her a free hand while cutting or trimming their hair. Ranula recalled how some of the kids would go about showing off their new haircut announcing “Ranula cut my hair.” A couple of Ranula’s customers that Nagaland Page managed to speak to gave highly positive reviews of her haircutting skills.
Ranula recalls that her barbershop did brisk business for about 5 years but with the passage of time more haircutting salons opened up with better facilities. Eight years after she opened her shop, Ranula finally decided to down shutters as income had dwindled.
Dimapur dream
The pandemic, which has affected livelihoods worldwide, has kind of worked in Ranula’s favour. The word spread in her colony that the Barber of Ungma was at hand to visit homes to give haircuts when all haircutting salons in Dimapur were closed. And her list of customers has been growing slowly but steadily since then. Even with business in town back to normal, a few of her “Lockdown customers” have chosen to stay loyal to her.
Ranula has been living with her sister in Dimapur for about 3 years now. And she is now looking forward to 2021 to open her own shop in the town.  “If the pandemic situation gets better in the coming year, I plan to open a shop here someday soon.” She is aware that with the many barbershops in every nook and corner of Dimapur, establishing a new business would be tough. And as the profession continues to be highly male-dominated, men might not trust a woman with their hair. Yet despite all odds, Ranula is willing to take the risk because as she says, at the end of the day, it’s all about the quality of one’s work.