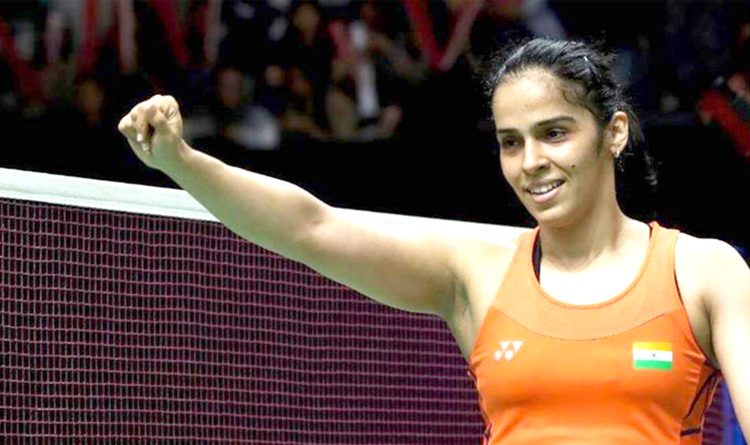 KOLKATA, November 28: Indian badminton star Saina Nehwal on Saturday said she’s definitely in the race for the Tokyo Olympics but before that she has to get back to her rhythm and win tournaments.
The 2012 London Olympics bronze medallist, who has slipped to 22nd in Badminton World Federation’s Tokyo Olympics qualification rankings, has recently struggled with niggles and is likely to return to action in next year’s Asian Tour.
“I know Olympics is in everyone’s head. It’s something very big but before that you have to think about so many tournaments. I’ve to get back to my rhythm and win against the players who are in top-20,” Nehwal said in a virtual interactive session hosted by the Indian Chamber of Commerce.
“There’s some two-three months’ of training before that. You have to be perfectly fine and play seven-eight tournaments, after that only I will think about the Olympics. But yes, I’m definitely in the race. I want to do well and I’m working hard for that.”
A big fan of tennis superstar Roger Federer, the 30-year-old Saina said if the Swiss ace along with the likes of Novak Djokovic, Rafael Nadaland Serena Williams can go strong at not so a young age, she too can.
“I can see great examples in Djokovic, Federer, Nadal, Serena doing so well.
Why not you have to see how it goes? I’m a fighter and I will get back.
When he can do it, why can’t I?” she said.
“Yes, there were times when I felt I have to ‘stop playing’ and ‘I can’t win anymore’. But then I thought I could push it.
“I love to fight. What will I do sitting at home. This is my life, this is my job,” she added.
The former world number one, who recently pulled out of the Denmark Open that restarted the international calendar post COVID-19 pandemic halt, further said she can become the best in the world again.
“I’m doing well. Injuries play a big role and that happened to me. As of now, I feel good. I can do it, I can be the best in the world. It’s always been there in my head. I’ve to correct my niggles. Improvement is definitely happening.
“Let’s how I play. I don’t want to take that action suddenly. I want to see how badly I lose, if I’m not capable of playing anymore,” she signed off. (PTI)