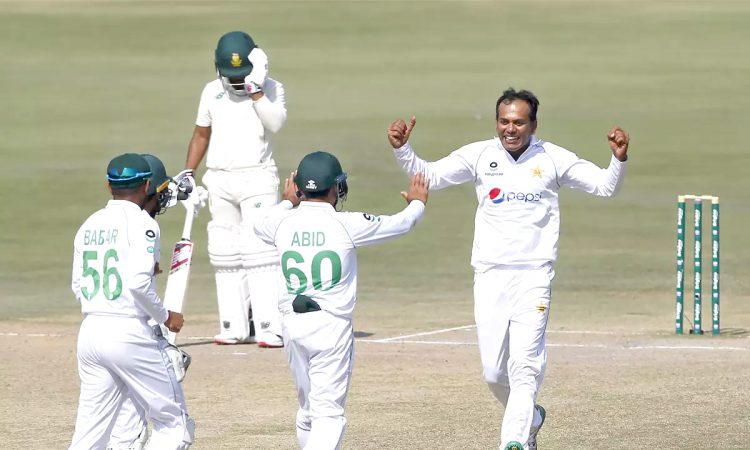 KARACHI, January 29: Left-arm spinner Nauman Ali took five for 35 on debut to brush aside the South African tail in their second innings and help Pakistan to a comfortable seven-wicket victory on day four of the first Test at the National Stadium in Karachi on Friday.

The 34-year-old claimed the final four wickets to fall, taking his tally to seven in the Test, as the tourists were dismissed for 245, which set Pakistan a modest victory target of 88.
The hosts had a wobble when Anrich Nortje removed two batsmen in one over, but skipper Babar Azam (30) and Azhar Ali (31 not out) eased their side to a comprehensive victory in a match in which fortunes fluctuated until a burst of wickets for Pakistan late on the third day turned the game in their favour.
The second and final Test starts in Rawalpindi on Thursday. South Africa will also play three Twenty20 Internationals on the tour, their first in Pakistan since a militant attack on the Sri Lanka team bus in Lahore in 2009, in which six policemen and two civilians were killed.
South Africa looked comfortable at 175 for one in their second innings late on the third day until Nauman and Yasir Shah (4-79) picked up three big wickets as the shadows lengthened, including those of set batsmen Aiden Markram (74) and Rassie van der Dussen (64).
The wickets kept tumbling on day four. South Africa lost their final nine for the addition of only 70 runs as the ghosts of spinners past on the sub-continent came back to haunt them again.
The team’s battles with the turning ball are no secret, but there had been the hope they would be mentally better prepared for this battle on Pakistan wickets which are traditionally not as helpful for the spinners as those in India or Sri Lanka.
But Nauman and Yasir took 9-114 between them in the second innings, including visiting captain Quinton de Kock (2), whose run of form will be of some concern to the tourists having only managed 45 runs in his last four Test innings.
South Africa were bowled out for 220 on the first day, but then had Pakistan on the ropes at 27 for four before a superb century from Fawad Alam (109) saw the home side reach 378 and claim what proved a decisive lead on the first innings. (Reuters)