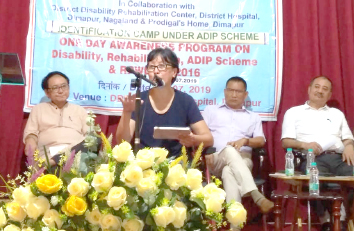 Dimapur, July 29: A 2-day ‘Identification & Assessment Camp for Persons’ with Disabilities and Awareness Camp on Disabilities’ organized by National Institute for Locomotor Disabilities (DIVYAGJAN), Kolkata in collaboration with Dimapur District Rehabilitation Centre and Prodigals’ Home, Dimapur is underway here at DDRC Complex, District Hospital, Dimapur.
During the inaugural session which was held at Chapel Hall, District hospital, DC & Chairman, DMT, DDRC, Dimapur, Kevekha Kevin Zehol, who was present as the guest of honour said that he has found the data related to the number of persons with disabilities in the district varies from department to department and it is time to work together, therefore, and be realistic about it.
He said that the data collected during the Lok Sabha elections was different from the data of DDRC, which are again different from the data of the Social Welfare Department.
He said that there is nothing by chance but everything there is by design and asked the persons with disabilities to come forward with their needs and take the tools required instead of sitting at home, as well as to make others aware of the camp.
State Commissioner for Disabilities, Diethono Nakhro expressed that Nagaland hasn’t been able to leverage on the schemes for disabilities in the past and her office is starting so many things that should have been done in the past already and blamed it on the successive governments and the society as a whole.
Mentioning the sorry state of the DDRC, she said that the wing lacks professionals and it has been struggling since the inception but still it is going on somehow due to the efforts of the few dedicated staffs and hoped that in future the centre will see some local professionals.
She said that for years, the state governments did do much for the differently abled and they have been marginalized and it was shocking for her to realize the lack of programmes for them.
“With disability, we are immediately at a disadvantage,” she said and added that the youths are not aware of the importance of rehabilitation and the lack of resource centers has been a huge disadvantage.
“I am an activist and will remain an activist,” she said.
CMO Dimapur Dr. Vikato Kinimi previously in his address had said that persons with disabilities need rehabilitation first and the rehabilitation centre that the hospital has is not known by many.
He asked the PwDs to not settle on living a life of discouragement because of their condition.
District Welfare Officer Tosheli Zhimomi in her speech mentioned that there are more than 3,000 identified PwDs and 621 are getting pensions and the department is also trying to enhance the amount of their pension.
Aratatran Patra, I/C ORS, NILD, Kolkata in his speech mentioned that the programme is among the many that the institute undertakes every year as per of its outreach.
The persons identified in the camp will then be provided tools to aid them in the coming days. The camp will conclude on July 30. (Page News Service)