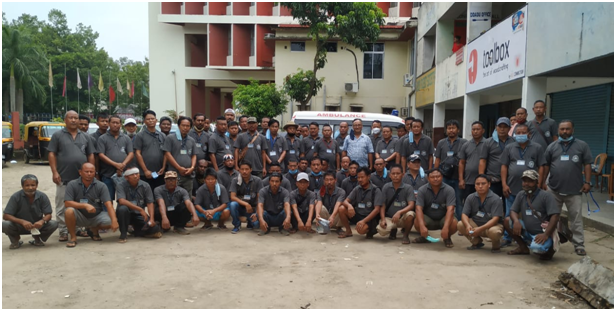 Dimapur, August 28: President of Dimapur District Auto Driver’s Union, Tito Yepthomi, on Friday released the contact numbers of the union’s In-Charges at different locations in a bid to not allow the auto drivers in the district to charge the customers more than necessary.

The union released the list on the sidelines of the release of new uniform for the union’s officials, parking In-Charges, executive members, and advisors which would make them now distinct from the auto drivers and easier for the people to reach out to the union with their grievances.

Unlike the uniform of the auto drivers, the officials and others will now don half-sleeved t-shirts of a darker shade of grey carrying the logo of the union to make them easily identifiable.

Speaking to the media in the union’s office here at Super Market, Yepthomi said that increased charges to an extent is understandable as the prices of petrol and diesel have seen a spike and the pandemic is taking a toll, but if the consumers are charged overtly, they can now reach out to the In-Charges and register their complaints.

On the occasion, he also cleared that while the ambulance service of the union is meant for the auto drivers and their families free of charge, its service is not confined and general public can contact 7005041574 to avail it in times of need, but it wouldn’t be free.