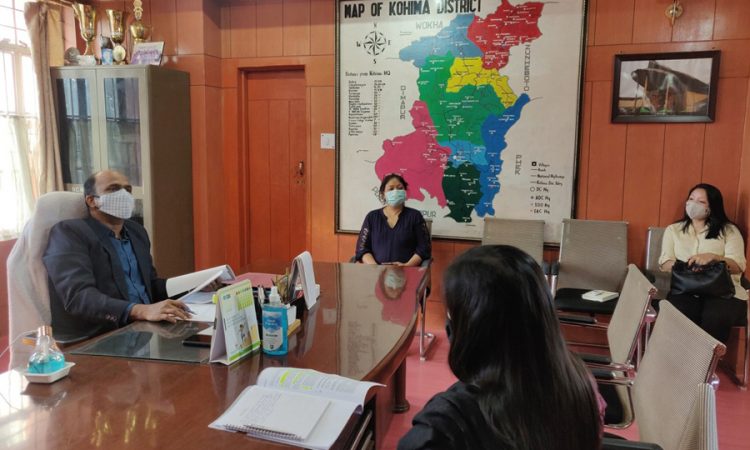 Dimapur, October 30: Deputy Commissioner & chairman of Nasha Mukt Bharat Kohima, Mohammed Ali Shihab A formally launched the Nasha Mukt Bharat campaign for the district of Kohima in his office chamber.
ADC Kohima, Lithrongla Tongpi Rutsa; District Welfare Officer, Akali Sema; Child Development Project Officer Kohima, Hebou Rio; SA Neikesonuo from Social Welfare Department along with other members were present during the launching of the programme.
Launching the campaign, the DC said the Ministry of Social Justice and Empowerment, Department of Social Justice & Empowerment has prepared Nasha Mukt Bharat Annual Action Plan 2020-2021 to be implemented in the 272 districts, which are identified as most vulnerable in terms of substance and alcohol abuse. Three districts from Nagaland State namely Kohima, Dimapur and Mon district were also listed based on the inputs received from Narcotics Control Bureau and the findings of the comprehensive National Survey done by the Ministry.
DC said the District Level Committee has to ensure the formulation and implementation of the Nasha Mukt Barat campaign in the district. For which, he called upon all the members to have proper coordination in order to take forward the campaign activities successfully. He also asked the concerned officials to work out the Action Plan of the campaign for the district and submit it to the State Nodal Officers at the earliest for further implementation of the programme.
On variously functions of the Committee, DC pointed out that aggressive sensitisation programme on the campaign is required to reach out all the Educational Institutions, University and community levels. To have social media strategy for the district campaign and implementation of the same and also to contribute collective efforts with all the implementing agencies for the successfull implementation of the campaign. (Page News Service)