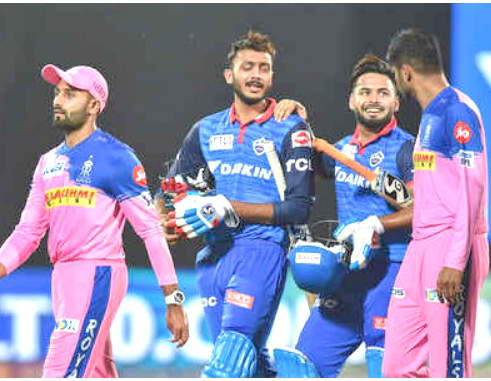 NEW DELHI, May 4: Delhi Capitals crushed Rajasthan Royals’ play-off hopes with a convincing five-wicket victory to finish off the league campaign in the ongoing IPL on a high note on Saturday.
Already through to the play-offs, Delhi Capitals first rode on veterans Ishant Sharma and Amit Mishra’s superb efforts with the bowl to restrict Rajasthan Royals to 115 for nine and then chased down the target in 16.1 overs, with Rishabh Pant remaining unbeaten on a 38-ball 53.
The win lifted Delhi to the second spot in the standings with 18 points from 14 games but to finish as second best side, the Capitals would need Mumbai Indians to lose against Kolkata Knight Riders on Sunday.
A win for Mumbai would automatically drop Delhi to the third spot as they have an inferior net run-rate.
Rajasthan are out of the tournament, finishing with just 11 points from 14 games.
Chasing a modest target, Delhi made a quick start through Shikhar Dhawan (16) and Prithvi Shaw (8) before Ish Sodhi (3/26) removed both the openers in consecutive balls to give himself a hat-trick chance.
Sodhi first got rid of Dhawan, in the second ball of the fourth over, holed out by Riyan Parag and then Shaw played on the next delivery.
Skipper Shreyas Iyer (15 off 9) and Rishabh then added 33 runs off 25 balls for the third wicket before the former was holed out by Liam Livingstone off Shreyas Gopal.
While Delhi lost two more wickets in the form of Colin Ingram (12) and Sherfane Rutherford (11), Rishabh carried on his bat and finished off the chase by hitting Sodhi for a big six over long-leg off and in the process also notched up his fifty.
Rishabh’s unbeaten knock was studded with two fours and five hits over the fence.
Earlier, Ishant (3/38) did the early damage before leg-spinner Mishra (3/17) came to the party to rock Rajasthan’s innings.
Young Parag (50 off 49, 4x4s, 2x6s) was the lone bright spot for Rajasthan as he held on to one fort and notched up his maiden IPL fifty to take the visitors close to the 120-run mark. (PTI)