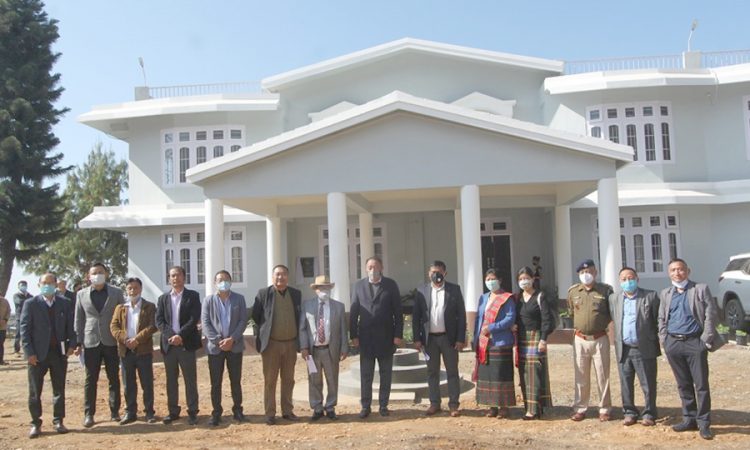 Dimapur, December 6: Nagaland State Government presented a new Deputy Commissioner bungalow as a Christmas gift to the people of Wokha district on December 5.

Inaugurating the new bungalow the Advisor, CAWD & NSDMA, Kazheto Kinimi stated that the bungalow has come into reality and the building has now become the public property of entire Wokha, the upkeep of which is in the hands of public of Wokha and the concerned Deputy Commissioner.
The Advisor thanked the State Government led by the Chief Minister and the Deputy Chief Minister for their upfront support in providing the fund for timely completion of this majestic bungalow. Kinimi also thanked the contractors M/S ACE Constructions for timely completions and for the job well done.
Commissioner, Nagaland Rovilatuo Mor, IAS in his short speech extended word of gratitude to the State Government as well as the CAWD department for coming up with magnificent bungalow, which is a basic requirement for a district to have such an infrastructure and the public of the district should take pride of the building as having such kind of infrastructure is a blessing to the people.
He urged the public to make effort to protect and safe guard and make good use of the bungalow as it has now become public property.
Executive Engineer, CAWD Er. Sungtiba Amer, while delivering the technical report said that the building was conceptualized during 2014-15, which was done during the time of our present Commissioner, Nagaland Rovilatuo Mor, the then DC Wokha. The building has a total of 15 rooms and the estimated cost of construction is Rs. 278. 48 lacs, and the stipulated time of completion is 24 months. He added that it is indeed a proud moment for the state and the district in particular that this building has come into a reality, which was a long felt need of the citizens of Wokha district.
Deputy Commissioner, Wokha Orenthung Lotha who chaired the programme, thanked the Government, the CAWD department as well as the Contractor for completing the building incorporating all required requirements of DC’s bungalow.
Later in the day Advisor along with his entourage had an interaction with the Wokha District Disaster Management Authority. DC Wokha, who is also the chairman of WDDMA, briefed on the preparation and activities of the said unit in the district.
Advisor accompanied by the Nagaland Commissioner, EE, CAWD along with Wokha district Administration inspected the new site for the DC’s complex. (Page News Service)