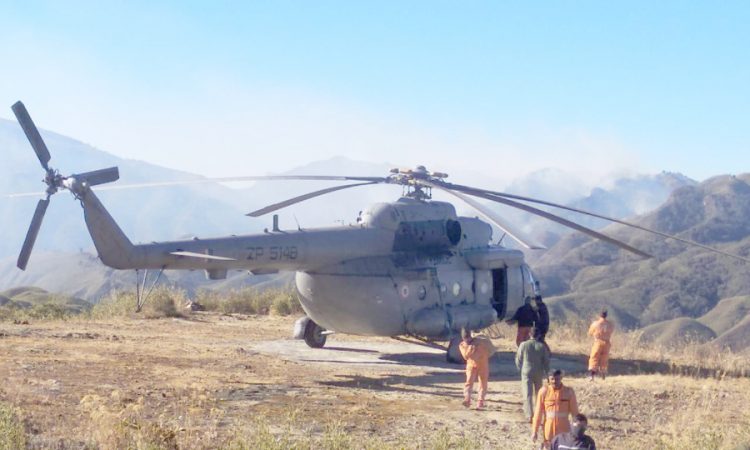 Operation firefight to intensify from Thursday

KOHIMA, JANUARY 6: The operation to douse the wildfire in Dzukou range, which has been blazing since December 29, entered the 9th day today, with the fire reportedly gaining momentum and moving towards the north side of Dzükou Valley.

Although State authorities continue to maintain that the fire is under control, and likely to be fully doused the next day, which has been their refrain for the last few days, the fire is showing no signs of abating and is reportedly being witnessed at multiple spots across the Dzukou range despite exemplary efforts by the Indian Air Force (IAF) and personnel of the NDRF, SDRF, Home Guards & Civil Defence, Police and Southern Angami Youth Organization (SAYO) volunteers.
With the inferno spreading to multiple spots in the valley, Divisional Forest Officer, Kohima, Rajkumar M said, “We are intensifying the operations as more than 130 personnel of the Police, Forest, NDRF, SDRF and SAYO volunteers are now stationed in base camp for Thursday’s early morning operations.”
They are camping near the fire site so that they can do operation early tomorrow, he said, adding another 90 personnel will be joining them on Thursday morning and around 250 strong-contingent is expected to intensify the operation.
Firefighting equipment, ration, and camping materials were flown to Dzukou heliport by IAF choppers today for the forces camping at the base camp, he said.
Asked about the impact on the main Dzukou valley, the DFO Kohima said, “It is safe as of current situation.”
PRO (Defence) Kohima Lt Col Sumit K Sharma informed that IAF helicopters continued with the Dzukou fire operations and ferried 3,310 kg firefighting equipment and NDRF personnel to Dzukou valley from Jakhama, near Kohima, on Wednesday.
IAF operations to assist fire fighting will continue on Thursday, he said.
Govt reviews fire ops
Meanwhile a review meeting on Dzükou fire operation was also held Wednesday, under the chairmanship of Home Commissioner, Nagaland, Abhijit Sinha (IAS) with Commissioner Nagaland, Rovilatuo Mor (IAS) in the DC’s Office, Kohima.
In the meeting, Deputy Commissioner, Kohima, Mohammed Ali Shihab A (IAS) briefed on the updates of Dzükou fire status, where he informed that the fire is moving towards north side of Dzükou Valley as reported by India Air Force (IAF) pilots.
Discussing the present scenario faced at the fire incident locations, the meeting decided to plan more fire line cutting to intensify the operation by Thursday. It was also discussed to increase the number of India Air Force (IAF) sorties.
As the fire incident locations are far from the base camp, the meeting also discussed to increase stationed force by setting up more camps in the base camps to create accommodation for NDRF and others. The meeting further discussed to survey an alternative route to reach the fire incident sites for containment of the inferno.
The meeting was also attended by SP, Kohima, Manoj Kumar; DFO, Kohima, Raj Kumar; ADC Kohima, Lithrongla Tongpi Rutsa; Deputy Commandant, NDRF and others.
(Page News Service)