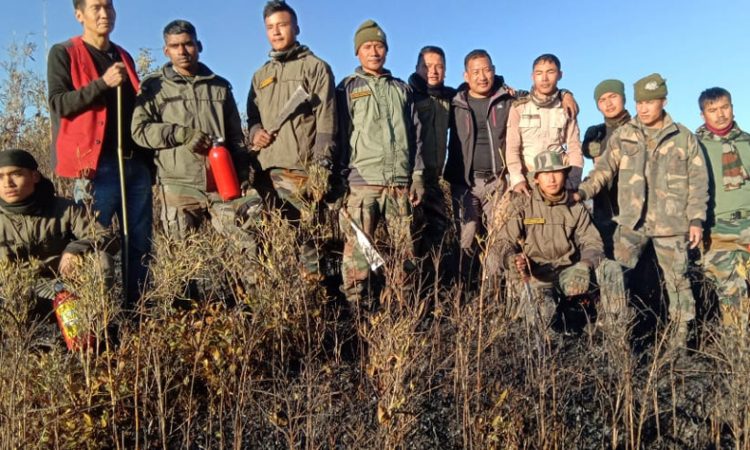 Dzükou fire ground Operation team pose for lens after conducting the operation for the day at Dzükou valley on 7th January 2021.

KOHIMA, JANUARY 7: After 10 days of relentless firefighting, the inferno that engulfed the picturesque Dzukou Valley on December 29 last year has been largely contained and State authorities are optimistic of totally dousing it by Friday.

Nagaland State officials, overseeing the fire operations in the Dzukou Range, were optimistic of some “good news” on Friday regarding the fire situation.
OSD, Nagaland State Disaster Management Authority (NSDMA), under Home Department, Johnny Ruangmei and Divisional Forest Officer, Kohima, Rajkumar M said the fire has been contained to a great extent and expressed hope of “good news” on Friday.
No new fire sites were spotted on the 10th day of the Dzukou Range fire on Thursday, while the Deputy Commissioner & Chairman DDMA, Kohima, Mohammed Ali Shihab A (IAS) reported that fire on the Southern side of Dzükou Valley has been physically doused off.
Reviewing the Dzükou fire operation in an emergency meeting today, the DC said on January 7 the fire fighting team, led by SDO (Sadar), Kohima, and SDPO, South, reported that the fire on Southern side, which has been descending, was physically doused off by the ground team and the fire was under control at the time of reporting.
Dzukou Range, which cradles the magnificent Dzukou valley, has been burning since December 29.
Ground firefight is being conducted by the joint team of State Disaster Response Force (SDRF), Police, Fire & Emergency Services, Forest, State and District Disaster Management Authorities, supported by local volunteers of the Southern Angami Youth Organization.
Reinforcement was made by the National Disaster Response Force for the ground fight while 4 IAF choppers are being used to spray water in the fire spots on the mountainous terrain.
OSD to NSDMA, Johnny Ruangmei said that operation to douse the blazing inferno in Dzukou area continued for the 10th day through air and ground on Thursday and the team has been able to control the fire from spreading further.
“No new fire site were found today, while the portions on fire have been contained to a great extent,” said Ruangmei.
He informed that the NSDMA, NDRF and IAF will conduct joint aerial survey on Friday to check if any fresh fire has erupted in any spot. The final call to stop the operation will be taken only after the survey, he said.
Nonetheless, all the ground teams will be ready and continue with containment efforts from the early hours on Friday, he said.
On the damaged caused by the fire, Ruangmei said currently the focus is on controlling the fire while proper damage assessment will be conducted only after the current mission is accomplished as post-disaster damage assessment.
Divisional Forest Officer, Kohima, Rajkumar M said that “situation is under control but operation will happen wherever fresh fires are detected”.
Both the officers also expressed hope of “good news” on Friday.
“IAF with 4 Heptrs will continue missions to assist in the Fire Fighting tomorrow in Dzukou Valley near Kohima,” said PRO (Defence) Kohima Lt Col Sumit K Sharma.
Today in an emergency meeting of the District Disaster Management Authority (DDMA) Kohima, DC, Kohima, Mohammed Ali Shihab A, said the team stationed at base camp will monitor the fire situation and plan for Friday’s operation accordingly by the first hours.