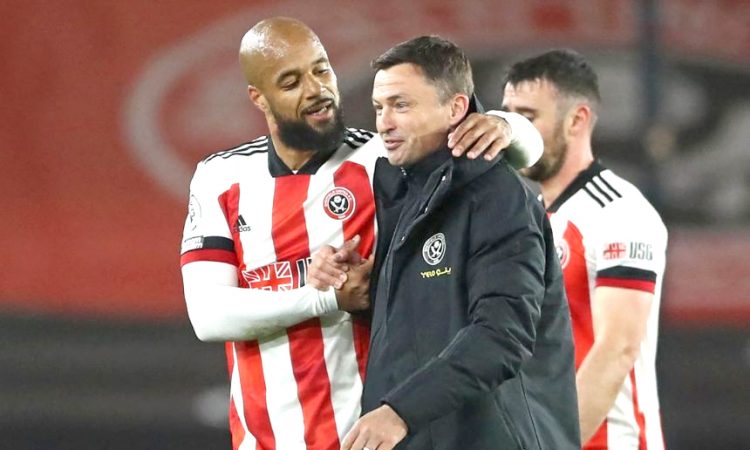 McGoldrick (left) celebrates with Sheffield's Interim manager Paul Heckingbottom on the pitch after the match.PHOTO: AFP

SHEFFIELD, April 25: A first-half goal by David McGoldrick gave Sheffield United a bittersweet 1-0 win at home over Brighton & Hove Albion on Saturday a week after the Blades were relegated from the Premier League.

Sheffield United lost any chance of staying in the top flight after a 1-0 defeat by Wolverhampton Wanderers in the previous round but they left struggling Brighton with work to do if they are to avoid joining them in the second-tier Championship.
The result left the Seagulls 16th on 34 points from 33 games, seven ahead of 18th-placed Fulham who occupy the final relegation spot with five games remaining. Sheffield United stayed bottom on 17 points.
The home team’s interim manager Paul Heckingbottom praised his side after celebrating his first win with the Blades following four successive defeats since he took over from Chris Wilder last month.
“The players deserve the utmost credit,” he told the BBC. “We spoke before the game and for them it’s justice and the right result for their attitude because its been a tough, tough season.
“You get what you deserve in football and tonight we got the three points. “We know we are a Championship club next season but it doesn’t mean we’re not going to enjoy these last few games.”
McGoldrick netted in the 19th minute after Brighton’s defence failed to clear the danger and the home team’s striker beat goalkeeper Robert Sanchez with a smart left-footed shot on the turn from eight metres.
Sheffield goalkeeper Aaron Ramsdale twice denied Neal Maupay, who also skied a shot from three metres with the goal at his mercy after Brighton midfielder Jakub Moder had a goal disallowed for offside in the build-up.
Yves Bissouma and Jose Izquierdo also came close for Brighton but the home side held on in the closing stages.
Brighton boss Graham Potter was disappointed.
“”It’s a frustrating result and the performance wasn’t probably the level it has been recently,” he said.
“We didn’t have the quality we can have and when that happens in the Premier League it can be hard. It’s not enough because there’s a lot of points to play for.”
Watford seal Premier League promotion with victory over Millwall

Watford bounced back to the Premier League at the first time of asking after Saturday’s 1-0 win over Millwall sealed promotion.
Brentford’s win at Bournemouth earlier in the day meant that only three points would be good enough for Xisco Munoz’s men to be promoted alongside Norwich, who came down with them last season.
Ismaila Sarr’s early penalty gave Watford the perfect start, but they had to withstand a nervy finale to guarantee their place back in the prestige and riches of the English top-flight.
Prior to Munoz’s appointment on December 20, automatic promotion looked unlikely after dip in form under Vladimir Ivic.
However, 17 wins in just 24 league games under the Spaniard helped amass a 10-point lead over Brentford, who have just three games left to play.
“Everyone helped me, I have a big group behind me and it was an excellent run in the to the season,” said Munoz.
“I have been lucky with the players, we have a great connection, when everyone works with the same ideas and passion.”
Brentford are now at least guaranteed a playoff spot with Bournemouth, Barnsley and Swansea almost certain to join them in the battle for the final promotion place.
Barnsley moved nine points clear of seventh-placed Reading with a hard-fought 1-0 win over struggling Rotherham thanks to Carlton Morris’s early goal.
A week after securing their promotion, Norwich closed in on the Championship title with a 3-1 win at Queens Park Rangers to maintain their five-point lead over Watford with two games to go.
Xavi Quintilla, Max Aarons and Emiliano Buendia were on target for Daniel Farke’s men at Loftus Road.
At the other end of the table, all of the bottom three lost to give Wayne Rooney’s Derby a reprieve despite the Rams losing 2-1 at home to Birmingham.
Rotherham and Sheffield Wednesday, who lost 3-1 at Middlesbrough, are still four points behind Derby, although Rotherham have two games in hand to try and overturn that gap.

Bottom-of-the table Wycombe were realistically relegated by a 2-1 defeat at Cardiff.
The Wanderers are six points adrift of Derby but have also have a 13-goal gap to bridge on goal difference. (Reuters/AFP)