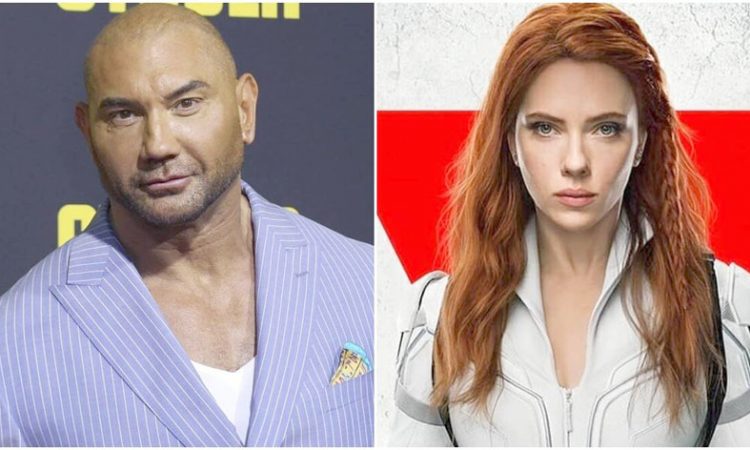 Wrestler-turned-actor Dave Bautista has responded to Scarlett Johansson’s lawsuit against Disney with a tongue-in-cheek comment. He quoted a news report on his Twitter account and wrote, “Told em they should’ve made a #Drax movie but noooooo! ???????.”

It is not exactly clear what he meant, but it appears he is jokingly suggesting he wanted Disney, which owns Marvel Studios, to make a movie on Drax the Destroyer, his MCU character that is a part of Guardians of the Galaxy. He would not have sued Disney like Scarlett did, Bautista seems to say. They did not listen and now there’s a lawsuit on their hands.
The reason Johansson took legal action against Disney was she felt she was cheated out of bonuses by the studio when it decided on a hybrid release for the movie (in both theatres and streamer Disney Plus). The release model hurt the film’s box office chances, the actor’s lawsuit alleged.
On the same day as its theatrical release, the Cate Shortland movie that is the first standalone Black Widow movie, also debuted on Disney+’s Premier Access, its PVOD service that is available in US, UK and other few countries.
Disney was quick to respond, and the statement was pretty aggressive. It read that there is no merit to the action and is sad and distressing since it disregards the “horrific” impact of Covid-19 pandemic.
Dave Bautista will be next seen in Taika Waititi’s Thor: Love and Thunder. He will reprise the role in the third Guardians of the Galaxy movie, which brings back James Gunn.

Marvel Studios president Kevin Feige is also “angry and embarrassed” at Scarlett Johansson’s predicament according to The Hollywood Reporter. Apparently, he also lobbied Disney against the simultaneous release plan and wanting to make the movie theatrical-exclusive. (Courtesy: IE)