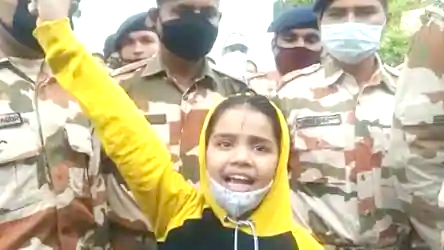 10-year-old daughter of the BSF sub-inspector pays her last tributes to him and shouts Bharat Mata ki Jay. (HT Photo)

Dehradun, November 16: Thirty-nine year old Border Security Force (BSF) sub-inspector Rakesh Dobhal who died on Friday in cross border shelling by Pakistan in Jammu & Kashmir’s Baramulla was cremated in his hometown in Rishikesh on Monday.
Dobhal’s mortal remains reached his home in Rishikesh at 7am and he was cremated in the afternoon in the presence of a large number of people who had gathered to pay their tributes to him.
He is survived by his wife and a 10-year-old daughter named Dwitya who showed exemplary courage while paying last tributes to her father.
Raising slogans of Bharat Mata ki Jai and Jai Hind, she hardly shed any tears and declared her intent to join the Indian Army to serve the nation, which she said would be the “ultimate tribute” to her father.
“When I grow up, I will join the army and serve the nation. My father sacrificed his life for the country; I too, would follow in his footsteps and serve the nation with whatever I could. That would be my biggest tribute to him,” she said during the last rites.
While Dobhal’s mother and wife were seen crying, Dwitya was trying to console them, saying, “Why are you crying? Feel proud for the sacrifice made by father,” bringing tears in the eyes of people gathered there.
Dobhal had joined BSF in 2004 and was posted in Jammu & Kashmir since last one year.
Earlier Uttarakhand chief minister Trivendra Singh Rawat paid his tributes to him saying, “People of Uttarakhand are proud of Dobhal who made the supreme sacrifice for the motherland. Our prayers are with his family members in this difficult moment.” (Courtesy: HT)