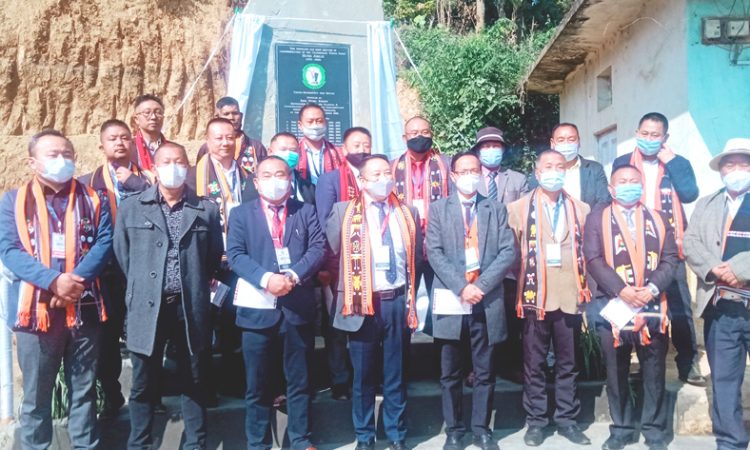 Neiba Kronu, Azo Nienu and others after unveiling silver jubilee monolith of CYF at Phek town on November 20.

Phek District will have one of the best roads in State: Kronu

Phek, November 20: The Chakhesang Youth Front (CYF) today celebrated its silver jubilee at Phek town under the theme “Retrospect and Revive.”
Gracing the occasion as the special guest, Minister for Planning and Coordination, Land Revenue and Parliamentary Affairs Neiba Kronu said that Phek district would soon have one of the best roads in Nagaland with the recent approval of several road projects.
The work for two lane road – Kohima to Jessami via Pfutsero will start by December, he said.
Two other road projects – Phek to Chozuba and Lozaphuhu to Avangkhu, bordering Myanmar, have also been approved.
Kronu said that such road projects once completed will boost the economy of the people.
Further, DPR for power project along Tizu valley, which has potential for 24 MW, is under preparation.
Kronu informed that Phek district can do extremely well in agricultural activities.
In this, he assured marketing linkages for the farmers of the Phek district to sell their produces outside the district.
He sought the cooperation of the Chakhesang frontal organisations for the success of the developmental activities in the Phek district.
Further, Kronu appealed the public to stay united and exercise positive attitude to ensure that no amount of space is allowed to hamper the developmental activities in the district.
Also speaking on the occasion as the guest of honour, MLA Kuzholuzo (Azo) Nienu saluted the founding members of CYF, which was formed way back in 1995 to defend and protect the rights of the Chakhesang community.
He called upon the youth to adapt the work culture and become self dependent and self sufficient.
Let us minimize the volume of depending on others, he said and encouraged the youth to work hard and live a worthy and prosperous life.
He also told the youth to know the value of work ethics and erase the word ‘ laziness’ from their dictionary.
“Laziness will take us nowhere. There is no place for lazy people in this competitive world,” he said.
CYF president Lhuvesayi Lohe said that CYF has made a positive contribution in bringing stability and progress among the youth over the past 25 years and has potential for even greater accomplishment in the years ahead.
He challenged the youth to come together and work for the better care of CYF family with dedication for the betterment of the society and reach newer heights.
Earlier, Chakhesang Public Organization (CPO) president Mikha Kenye released CYF silver jubilee souvenir.
The programme was led by Vetsiirayi Tetseo while vote of thanks was proposed by Nyitso Therie. (Page News Service)