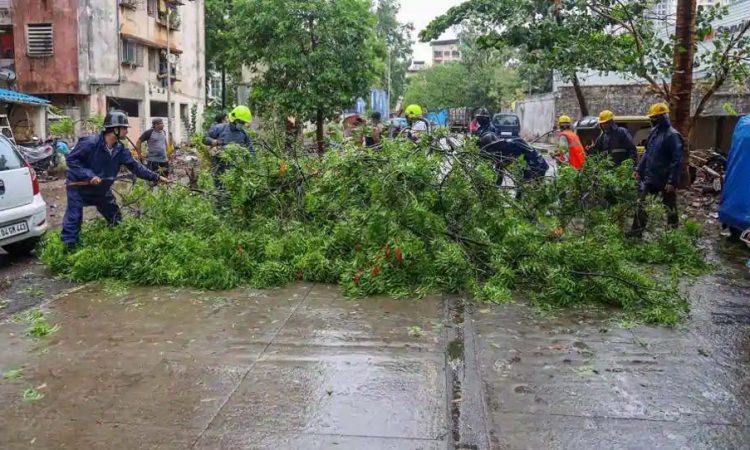 New Delhi, June 3: Three people died and as many were injured in cyclone-related incidents as ‘Nisarga’ made landfall near Mumbai, uprooting trees in nearby districts, even as the flood situation improved marginally in Assam where one person died on Wednesday taking the death toll to 10.
Meanwhile, the northern states of the country witnessed rainfall in several places like in parts of Uttar Pradesh and Rajasthan, bringing down temperatures further.
Cyclone Nisarga slammed Maharashtra coast with wind speeds of up to 120 kmph, making landfall at 12.30 PM at Alibaug near Mumbai. The process was completed by 2.30 PM, a senior IMD official said.
The cyclone is expected to weaken into a deep depression within the next six hours and currently it lays centered over Pune in Maharashtra, the official said.
Mumbaikars and people in neighbouring areas, including those in coastal Gujarat districts had braced for the cyclone but heaved a sigh of relief as Nisarga’s damage appeared limited to uprooting of trees in affected areas.
The cyclone did not cause any major damage on the southern coast of Gujarat following landfall and it passed without any major incidents and casualties, said state relief commissioner.
Meanwhile, in Assam one person died at Lakhipur in Goalpara district and nearly 1.45 lakh people were affected by the deluge in four districts – Goalpara, Nagaon, Hojai and Cachar.
Goalpara district is the worst hit with 1.16 lakh people suffering, followed by Hojai with over 22,500 people and Nagaon with nearly 5,650 persons. Till Tuesday, around 1.56 lakh people were affected in the three districts.
The SDRF has rescued six persons in the last 24 hours in Goalpara, ASDMA said. At present, 212 villages are under water and 22,718 hectares of crop areas have been damaged, it added.
Roads and many other infrastructures have been damaged at various places in Nagaon, Karimganj and Chirang districts.
Massive erosions have been witnessed at various places of Dibrugarh and Biswanath districts, ASDMA said.
Delhiites will get respite from heat wave conditions till June 10 owing to southwesterly winds bringing moisture to Delhi-NCR, the Met department officials said.
The south westerly winds ( through Rajasthan) in association with cyclone have brought moisture to Delhi NCR and north west India from Wednesday.
The maximum temperature in the national capital remained below the 40 degrees Celsius mark. The maximum was recorded at 36.4 degrees Celsius, four notches below the season”s average while the minimum settled at 24.9 degrees Celsius, three notches below normal.
In Uttar Pradesh, very light to light rainfall occurred at isolated places, the Meteorological Department said on Wednesday.
The eastern part of the state witnessed thunderstorm and lightening. According to the MeT, thunderstorm and lightening coupled with squall gusting up to 50-60 kmph are likely at isolated places over the state on June 4.
The maximum temperature in Haryana and Punjab continued to hover well below the normal limits as Chandigarh recorded a maximum temperature of 35.4 degrees Celsius, four notches below normal, according to the Meteorological Department.
In Haryana, Ambala’s maximum settled at 35.9 degrees Celsius, four below normal while Karnal recorded a high of 35 degrees, five below normal.
Hisar’s maximum settled at 36.5 degrees Celsius, six notches below normal while Narnaul registered a high of 35 degrees, down seven notches.
Ludhiana in Punjab recorded a high of 35.2 degrees, down five notches against normal limits. Amritsar registered a maximum of 36 degrees Celsius, and Patiala’s maximum settled at 36.3 degrees, both four notches below normal.
In Rajasthan, Jaisalmer emerged as hottest place, recording the maximum temperature of 41.7 degree Celsius.
Barmer, Bikaner, Kota, Jodhpur and Jaipur recorded maximum temperatures of 41.2, 40.7, 40.4, 38.4 and 37.8 degrees respectively.
Several places in the state, meanwhile, received light to moderate rains between Tuesday evening and Wednesday, the weathermen said, adding maximum of rainfall, 3 cm, was recorded in Kapasan (Chittorgarh) while Chhoti Sadri (Pratpargarh), Saipau (Dholpur), Relmagra (Rajsamand), Bhadesar (Chittorgarh) recorded 2 cm rains.
Some other places too received some rains below 2 cm during the period, they said.
Jaipur and Jodhpur also received 0.9 and 0.2 mm rains till evening since morning on Wednesday. (PTI)