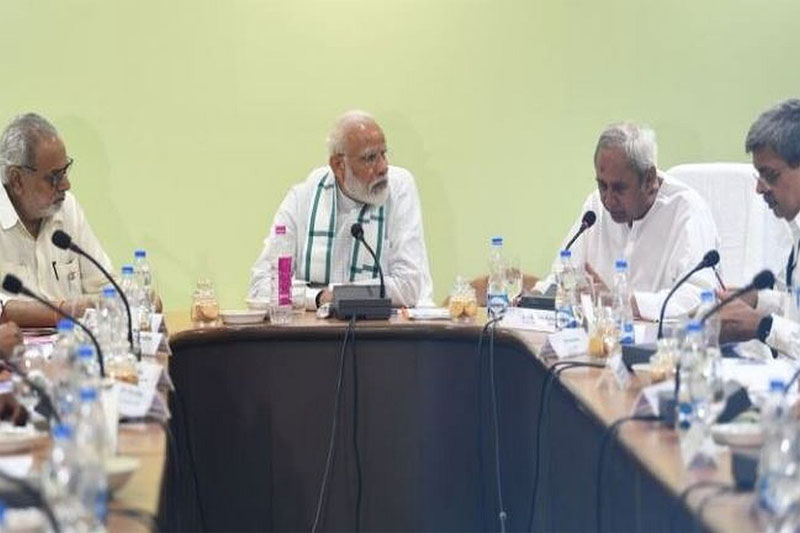 PM Modi along with Chief Minister Naveen Patnaik held a review meeting on the relief and restoration work with the government officials. (Photo: narendramodi.in)

New Delhi, May 6: Prime Minister Narendra Modi who conducted an aerial survey of cyclone devastated Puri and Khurda districts today announced assistance of Rs 1000 crore and appreciated the ‘excellent coordination between the centre and state” in handling the situation.
Earlier in the day, PM Modi was received by Governor Ganeshi Lal, Chief Minister Naveen Patnaik and Union Minister Dharmendra Pradhan at the Biju Patnaik International Airport in Bhubaneswar.
The PM was accompanied by the Governor and the two ministers on his aerial survey of the affected districts.
Following the survey, PM Modi along with Chief Minister Naveen Patnaik held a review meeting on the relief and restoration work with the government officials.
“Naveen babu has done good work,” said the PM while underlining the successful evacuation of 12 lakh people averting human causalities.
Addressing media persons after the review meeting at Bhubaneswar Airport, the PM said he had seen a detailed presentation made by the state government. “ I want to thank the people of Odisha, the fishermen and others who paid heed to advisory and announcements of the government as well as cooperated in the evacuation”.
The PM also informed that an additional amount of Rs 1000 crore will be released to the state, which was already given Rs 381 crore earlier. The Chief Minister had actually demanded Rs 17,000 crore for relief work.
He informed that a Central team will soon visit the state to assess the damage and the requirements of the state government. Already, a team of the PMO is here, PM Modi informed.
The Centre will provide ex gratia of Rs 2 lakh to next of kin of those killed in the cyclone and Rs 50,000 each to the injured, pm Modi said.
The Prime Minister had earlier spoken to Odisha Governor Ganeshi Lal and Chief Minister Naveen Patnaik over the phone and assured all possible help from the Centre for Odisha.
The death toll in Cyclone Fani rose to 34 on Monday, three days after the “extremely severe” storm barrelled through coastal Odisha, causing widespread destruction and leaving hundreds grappling with water shortage and power cuts. 21 people have died in Puri alone.
The Prime Minister also wanted to take stock of the situation in West Bengal which also faced the wrath of cyclone Fani and the Centre had written to the state about a review meeting of the PM with state government officials today.
However, according to PMO sources as saying by ANI, the request was denied and the Mamata Banerjee government replied that the officials were busy with election duty and hence the review meeting should not be held.
The ‘extremely severe’ Cyclone Fani hit the Puri coast in Odisha on Friday morning around 8 am, with heavy rain and strong winds lashing Odisha and parts of Andhra Pradesh. A wind speed of 145 km per hour was recorded, according to the India Meteorology Department (IMD).
Post midnight, cyclone Fani entered Bengal and crossed Kharagpur, with a wind speed at 70-80 kmph gusting to 90 kmph. (Courtesy:TS)