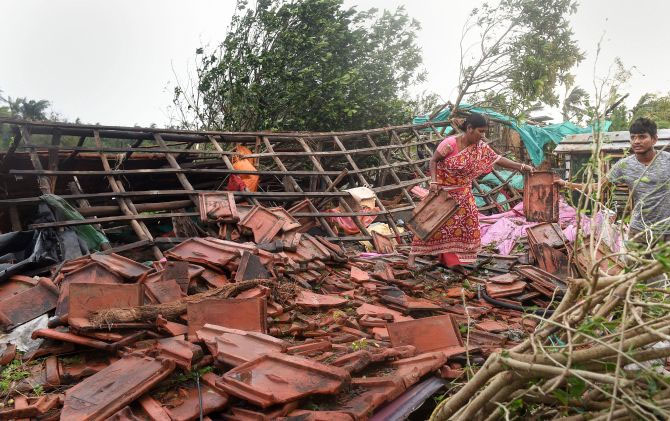 Bakkhali/Midnapore, November 10: Cyclone Bulbul, which made landfall between West Bengal and Odisha on Saturday night, left 10 people dead in the two states before losing steam and veering off towards Bangladesh as a deep depression, officials said on Sunday.
The cyclone with wind speed of up to 125 km/hour left a trail of destruction with the homes and crops damaged in the nine districts of southern Bengal and coastal areas of Odisha, affecting around four lakh people in the two neighbouring states, according to the government officials.
Prime Minister Narendra Modi called up chief minister Mamata Banerjee – who spent the entire night at the special control room in the state secretariat – on Sunday morning and assured of all possible assistance from the Centre.
“I pray for everyone’s safety and well-being,” PM Modi tweeted. West Bengal chief secretary Rajiva Sinha also held a video conference with Cabinet Secretary Rajiv Gauba and officials in the PMO on Sunday morning.
Stating that Centre was supporting the two state governments, home minister Amit Shah tweeted that ten teams of National Disaster Relief Force (NDRF) in West Bengal and six in Odisha have been deployed to assist the state governments to carry out relief measures. Eighteen other teams of the NDRF are on standby, he said.
Banerjee, who was congratulated for the “good work” done by state governor Jagdeep Dhankar, tweeted saying she will carry out an aerial survey of the Sunderbans area on Monday and then review the developments with officials.
The India Meteorological Department (IMD) said Bulbul hit coastal areas of West Bengal at around 8:30 pm on Saturday with a wind speed of 115–125 km an hour. Bulbul had an impact in radius of 400 square km and took around four hours to pass over the Sunderbans spread across the North and 24 Parganas districts, IMD said in a statement.
Five people died when trees and houses collapsed in the Basirhat area of North 24 Parganas district. A teenager was electrocuted in the Nodakhali area. “Initial report says 3,500 houses been completely damaged,” said North 24 Parganas district magistrate Chaitali Chakraborti.
In East Midnapore district, a woman died in her sleep in the Nandigram area on Saturday night when a tree fell on her house, said Patha Ghosh, the district magistrate. Many houses collapsed in Ramnagar, Nandigram, Khejuri and Haldia and 22,000 were shifted to rescue centers.
“Extensive damage was done to the crops,” Ghosh said.
Bulbul left behind a trail of devastation in the coastal district of south 24 Parganas, uprooting electricity poles, snapping overhead wires, mowing down trees and blowing off roofs of mud houses after landfall between Sagar and Frazerganj around 8:30 pm on Saturday.
Although officials said nobody died, villagers in Frazerganj said a man named Sanjay Das was killed and eight men had gone missing.
“There are no reports of death till 12 noon. We are providing relief materials. Thousands of people have shifted to cyclone shelters, school buildings and hotels. Aerial survey is being done using drones to assess the damage,” said South 24 Parganas district magistrate P Ulanganathan.
“I have seen many (cyclonic) storms but not seen one like Bulbul so destructive. The storm raged for nearly four hours,” said 92-year old Amar Patra, a resident of Bakkhali.
The sun was visible on Sunday morning. Villagers who had taken refuge in cyclone shelters started returning home to assess the damage. “I lost a cow when the wall of the cowshed collapsed. I somehow managed to escape with my wife and children and took shelter in a hotel. My house is destroyed,” said Chittaranjan Kanjilal, a resident of Frazerganj.
The worst sufferers are paddy farmers and students who would be appearing for their board exams early next year.
“My house collapsed and it is now under water. I have lost all my books. I have to sit for the test before board exams. I don’t know what to do,” said Soma Jana, a class 12 student.
In neighbouring Odisha, where the impact of cyclone was much less, two persons were reported to have died, according to state disaster relief authority. (Courtesy: HT)