HomeTop StoriesCyclist from Uttarakhand creates awareness on use of dustbins
Top Stories
2 years agoDecember 27, 2019No tags 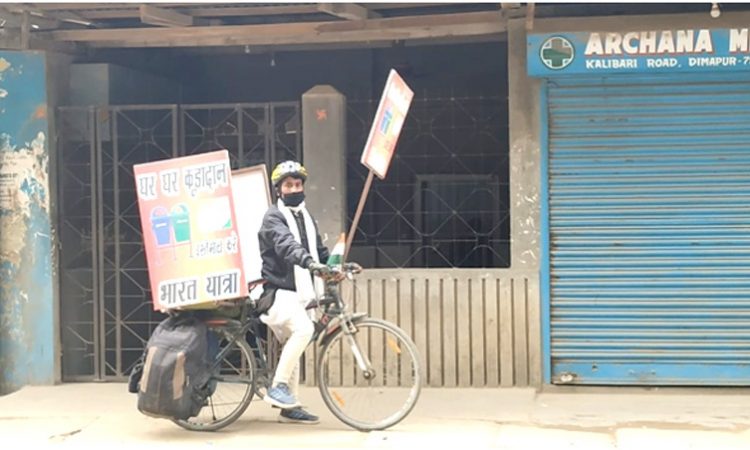 Dimapur, December 27: Luis Das, 29, from Haridwar, Uttarakhand, who is on a solo trip across the country on his bicycle, on which are mounted banners asking people to use dustbins, reached Dimapur on Friday, making Nagaland the ninth state he visited.
He started his journey on October 30 this year and he hopes to visit every state by October 30, 2020. He has already visited Uttar Pradesh, Bihar, Sikkim, Meghalaya, Mizoram, Tripura, Manipur, and Assam.
Talking to Nagaland Page on Friday near the office of Dimapur Municipal Council, Kalibari Road, Dimapur, Das said that he is undertaking the trip without any government aid to make people aware of the importance of using dustbins, calling the fight against uncleanliness a bigger fight than the fight against the British.
“Every year thousands of people die because of unclean surroundings,” he said and added that if every person uses dustbins as weapons than the fight can be easily won. He cleared that he is not on a mission to create or break any record but just to make India a cleaner place and he is covering 70-80 kms per day.
Das, who is attached with an ashram in Haridwar is being sponsored by Mahamandeleshwar Siddhart from the ashram and he sleeps in petrol pumps, bus stands, temples, hospitals etc. He carries money with him, but relies mostly on the kindness of the people for food and shelter. He also carries a microphone, clothes, and other basic items with him.
In Dimapur, he said, there is a lack of enough dustbins and disposal sites and urged the district administration to take care of it, while at the same time mentioned that he found Mizoram the best till now. He also asked people to segregate the dry and moist wastes and dispose them accordingly.
Das will next visit Arunachal Pradesh, and then the states in the Southern India.(Page News Service)