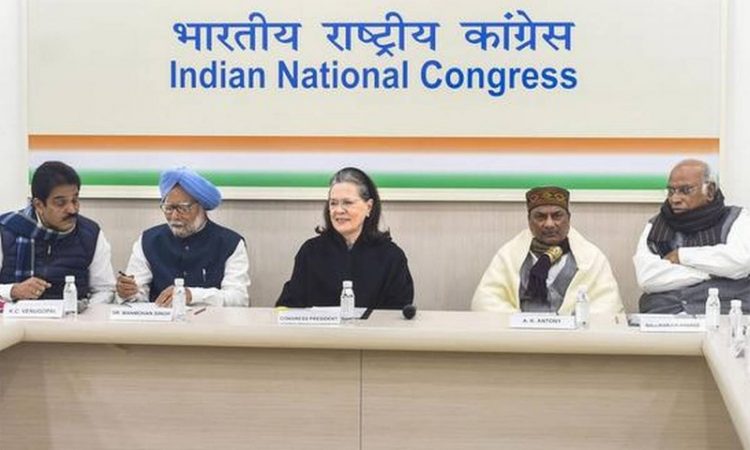 New Delhi, January 11: The Congress on Saturday demanded immediate withdrawal of the Citizenship (Amendment) Act and stopping forthwith the process of National Population Register, accusing the government of using brute majority to impose its “divisive” and “discriminatory” agenda.
Congress president Sonia Gandhi said the “sinister” purpose of the controversial citizenship law was to divide people on religious lines, and asserted that the NPR was not a benign exercise but “disguised NRC”.
Addressing the crucial meeting of the Congress Working Committee, Gandhi also demanded that a comprehensive high-powered commission be constituted to enquire into the incidents of violence during anti-CAA protests.
While Rahul Gandhi was not present at Saturday’s CWC meeting, former prime minister Manmohan Singh and top leaders Priyanka Gandhi Vadra, AK Antony, Ghulam Nabi Azad, Ahmed Patel, Mallikarjun Kharge, Ambika Soni and K C Venugopal attended the meet.
Congress chief spokesperson Randeep Surjewala, when asked about Rahul Gandhi’s absence, said, “Former Congress President Rahul Gandhi is currently travelling and will be available from tomorrow (Sunday) morning onwards”.
After over two hours of deliberations on the issues of student protests, the amended citizenship law and NRC, the economic and agrarian crisis in the country, the situation in Jammu and Kashmir and the mounting tensions between US and Iran in the Gulf, the meeting adopted a resolution and a statement was also issued by the party.
“The CWC demands that the Citizenship Amendment Act should be withdrawn and the process of NPR be stopped forthwith,” the party said in a statement.
Expressing “deep anguish”, the CWC said it condemned the “insensitive” response of the government and the “blatant use of state power” to silence the voices of dissent.
“The BJP government has used its brute majority to impose its divisive and discriminatory agenda in an insensitive manner. CWC cautions the government that its pursuit of divisive agenda with the sole objective of polarisation may give short term political dividends, but will create deep fissures in society undermining national unity and social stability,” the party said.
That presents a serious challenge to internal security and makes India vulnerable to hostile external forces, it said.
Sonia Gandhi said the CAA is a “discriminatory and divisive” law. “The sinister purpose of the law is clear to every patriotic, tolerant and secular Indian: it is to divide the Indian people on religious lines,” she alleged.
“At first, the government thought that the NRC exercise could be carried out throughout the country. After the disastrous results of the Assam NRC, the government has hit upon the idea of NPR. Let us not be under any illusion that the NPR is a benign exercise. In form and content, NPR 2020 is a disguised NRC,” she said.
She also said that as a party in government in several states, Congress must take a wise and uniform decision on NPR.
The party later said the government has not only failed to deliver on its promises, but has also aggravated a grim situation by its “insensitivity, flawed policies and a divisive agenda”.
“The callous and undemocratic attitude of the BJP government is a matter of serious national concern. The ill-conceived CAA has led to spontaneous nationwide protests. It has raised bonafide questions regarding its Constitutional validity and political morality,” the party said, adding that the law and proposed NRC have created fear and anxiety among religious and linguistic minorities, tribals and the poor.
The resolution adopted by the CWC said the Modi government has “unleashed the entire might of the brute state power to suppress, subjugate and stifle the voice of the youth and students across the country. Prime Minister and the BJP government have betrayed the trust of the youth”.
It further said: “The Modi government is systematically attacking the culture of creative thinking and learning, of questioning the hierarchy and of inculcating the culture of assimilation and cohabitation. The BJP government realizes that students and the young cannot be divided through its sectarian agenda. Hence, a designed conspiracy has been unleashed to attack the centres of creative and independent thinking”.
Sonia Gandhi said as students protests are gaining momentum, it is clear that the government is digging in its heels.
“Not a day passes without the Home Minister, and on some days the Prime Minister himself, making provocative statements,” she said in a direct attack on Prime Minister Narendra Modi.
“We have no faith that either the UP state government or the LG of Delhi will bring the culprits to justice. We therefore demand that a comprehensive high-powered Commission should be constituted to enquire into the incidents connected with the anti-CAA protests and justice to the affected persons,” Gandhi said.
She hit out at the government over the state of the economy and the situation in Jammu and Kashmir, saying it has neither the wisdom nor the will to take measures to stop downslide in the economy.
Gandhi said while people in J&K are denied fundamental rights, government makes farcical claims of normalcy and arranges guided tours for diplomats, referring to the visit of 15 envoys including US Ambassador to India Kenneth Juster to J&K.
The party’s top body also called for lifting of curbs and restoration of civil liberties in Jammu and Kashmir.
On chinks in opposition unity, Surjewala said this is not a fight of political parties or a Congress vs BJP contest. “So, it is no one political leader or not one political party’s fight and I sincerely hope that political leaders across the spectrum would see this obvious truth.”
Expressing concern over the economic situation in the country, the CWC called upon the government to reveal its roadmap for reviving the economy, investor confidence and job creation.
It also expressed deep concerns over the recent developments in the Gulf region where tensions have spiralled between the US and Iran over the killing of top Iranian commander Qasem Soleimani. (PTI)