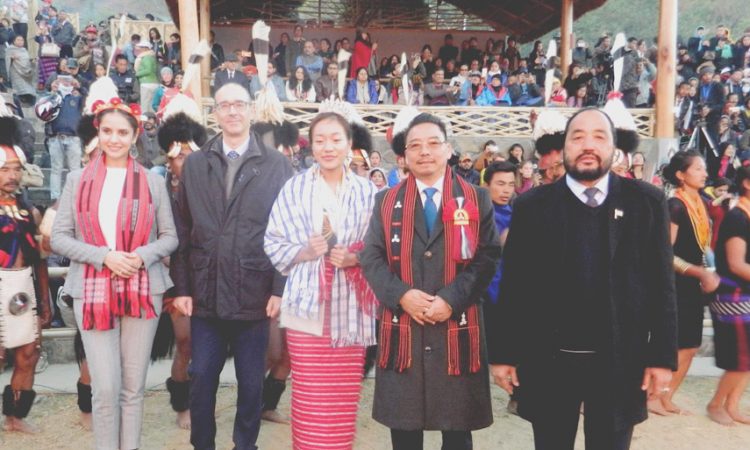 Kohima, December 10: Curtains came down the 19th edition of the Hornbill Festival of Nagaland, which is also known as the Festival of Festivals, creating a record of more than 2.5 lakh visitors witnessing the cultural performance of the 17 Naga tribes at picturesque Naga Heritage Village, Kisama.
This edition had 8487 visitors more than last year as the total visitors stood at 2,51,701 while last years was 2,43,214 visitors.
A total of 2702 foreigners, 37,397 domestic tourist and 2,11,602 local visitors witnessed the cultural performance of 17 Naga tribes, presentations from different states of the country, and also varied activities including indigenous games & sports competition, western music, kids competition and indigenous eateries at Kisama.
The last day nearly had 12,128 visitors including 10,325 locals, 1667 domestic tourists and 136 foreigners.
Gracing the valedictory function as the guest of honour, Italian Consul General, Kolkata, Damiano Francovigh said, “Italy is famous because tourism industry plays an important role in enhancing the economy of the country”.
Nonetheless, he said that he has seen many things, including the cultural heritage which can be of great interest for domestic and foreign tourist in Nagaland”.
The Consulate General therefore hoped that the Hornbill Festival gets more and more successful, and attract many tourist from India and abroad while it becomes the major force of growth for Naga economy”.
As the host of the closing ceremony, Deputy Chief Minister Y. Patton said that the rich cultural heritage of Nagaland has been hidden for centuries to the outside world but the Hornbill festival has served as a window to the outside people to learn and understand the Naga tradition and culture.
Meanwhile, he expressed happiness that there was no report of any significant crime committed against tourists during the ten days of the festival with the launch of Tourist Police in the State.
Tourism is one of the fastest growing segments of India’s economy and the tourist inflows have been increasing consistently, he said while adding that tourism industry need a safe and conducive environment.
The Deputy CM therefore said that safety and prevention of crime against tourist need serious attention.
Advisor for Tourism and Art and Culture, Khehovi Sumi acknowledge all stake holders for the successful competition of the festival while thanksgiving prayer was offered by Pastor of Faith Harvest Church, Rev. Shan Kikon.
Lighting of the bonfire by Damiano Francovigh, Dy CM Y. Patton, Advisor Khehovi Yepthomi, Miss Nagaland, Mewetshou Dianu and Miss World Asia Pacific 2014, Koyal Rana marked the culmination of the festival while visitors both foreigners, domestic and locals joined the cultural troupes in the final “Unity Dance” of the 17 Naga tribes.
In the morning programme of ‘Cultural Connect,’ the final cultural extravaganza presented by the Department of Art & Culture, was graced by Minister, Higher & Technical Education Temjen Imna Along at Kisama. Altogether, 17 cultural troupes from all parts of Nagaland showcased their rich cultural songs, dances and tradition.
It may be mentioned that the main objective of the Hornbill Festival is to revive and promote Naga ethnicity in the form of showcasing vibrant Naga culture and tradition to the outside world where every tribe can take part in the celebration at a common platform. The festival also aims at promoting tourism industry in the State by way of exhibiting Naga culture and tradition besides engaging local artists to showcase their talents and abilities in different fields.
The State Tourism Department is the nodal department for the Hornbill festival though it involves the participation and contributions of all other organising departments.
Speaking to media persons at Kisama, Secretary for Tourism, T. Mhabemo Yanthan said that the main challenges faced by the Government while organising such a big event is the lack of proper infrastructure and accommodation. In order to increase the inflow of tourist throughout the year, a calendar of events is required for which the Department of Tourism has started working on it, he said. He said events should not be held only during Hornbill festival but it should be held round the year from January to December in order to promote tourism in the State.
Deputy Director, Tourism, Veyielo Doulo stated that there is room for improvement in the area of basic amenities like water supply, toilets, ramp facility for people with disability as far as Hornbill Festival is concerned. He strongly emphasised on the importance and necessity of homestays during the festival in order to cater to guests and tourists, saying that the present carrying capacity is very limited. He also mentioned last minute VIP’s visit is a problem for the organising departments.
“Organizing such a mega event will always have criticism but we accept criticism as an advantage and a strength for us to improve in the coming years”, he remarked.
He appealed to all the guests and tourists to come again along with their friends and see the vibrant Naga culture and tradition in the coming years. (Page News Service)