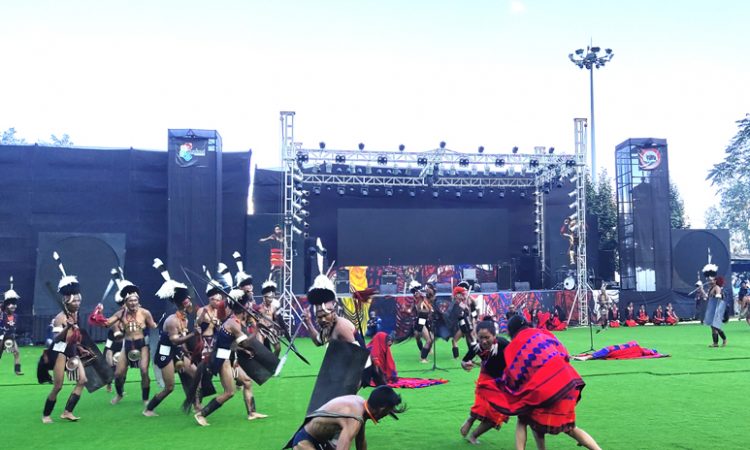 Kohima, December 3: Cultural performances by 17 Naga tribes’ cultural troupes enthralled the 12,830 visitors, including 485 foreigners, 3600 domestic and 8,745 locals on the third day of the Hornbill Festival at Naga Heritage Village, Kisama, some 12 kms South of State sapital on the Kohima-Imphal road.
Among the 17 performances, presentation by Chang and Garo cultural troupes not only enthralled the visitors but attracted them to join the troupes in shouting the tradition yodeling.
Chang Cultural Troupe performed the Lakoula Haupu which was an enactment of traditional practice of raiding an enemy village, wherein the raiders try to take as many heads as they can as war trophies.
During the raid the defending village takes every precaution to protect the women and children while the able men and warriors defend the village.
Though the presentation was emotional in nature, it also brought cheers and yelling from the audiences for the act.
On the other hand, Garo cultural troupe performed Wangala Dance, which is usually performed during their Wangala festival, a post harvest thanksgiving festival.
Forming two parallel lines, one female and the other male, the dancers dance to the beat of Damma (log drum). The dancers offer thanksgiving to Misi Salijong (Sun God) and in hectic rhythm move to the beat of drums, gongs and the blowing of the buffalo horn.
During the enactment, the chieftain called the audience in supporting him for the traditional cry.
The visitors also got a glimpse of performance of cultural troupes, which include Zeliang cultural troupe called Herielim (hornbill dance) a tribute to the great hornbill bird and the dance attempts to capture the movements of flocks of excited hornbills feeding on fruits atop the trees.
The performances were part of the ‘Cultural Connect’, a cultural extravaganza showcasing the rich traditional dances, songs and games of Naga tribes, presented by the Department of Art and Culture, Nagaland.
The cultural event was performed in two sessions. The tribes that performed in the morning session included Zeliang, Kuki, Yimchungru, Sumi, Rengma, Kachari, Pochury and Chakhesang. Ao, Phom, Konyak, Lotha, Khiamniungan, Garo, Chang and Angami performed in the afternoon session.
Traditional fire making
The traditional fire making, an indigenous game played mostly by the men of many Naga tribes was one of the entertainment highlights played on 3rd day of Hornbill festival 2019 at Naga Heritage Village Kisama today. Eleven participants from the tribe of Chakhesang, Chang, Ao, Angami, Garo, Sumi, Kachari, Zeliang, Rengma, Phom and Lotha participated in this traditional fire making competition.
The participants used dried wood, finely stripped bamboo, dried twigs and leaves. The competition has no rule of time duration but the one who makes the fire first is declared the winner.
Out of the 11 participants, Pashang from the Chang tribe was declared the winner, while Choyoto from the Chakhasang tribe and Hokiye Aye of the Sumi tribe were the 1st and 2nd runners up respectively. They received prize money of Rs 7000, Rs 5000 and Rs 3000 each respectively. All the participants were awarded consolation prizes.
A Traditional Touch
As part of Hornbill Festival, North East Traditional Healer’s Association has set up a stall – ‘A Traditional Healing Touch’ at Kisama with an objective to promote traditional folk art, to cultivate and promote holistic approach of traditional knowledge and to be an aspect of traditional, cultural and community health builder.
NETHA also aims to revitalize dying art of traditional knowledge of community health care services and to conserve flora and fauna to empower livelihood of traditional healers.
A traditional healing touch includes Naga massage & arthritis, traditional bone setting, traditional birth attendant, common ailments, jaundice, poisonous bites, etc. besides medicines made of medicinal plants are also available for different diseases.
Kids dance fiesta
Kids Dance Fiesta was held on December 3 at Children’s Park, Kisama. The event was organized by Synergy group enterprise in collaboration with Richa Production.
Altogether eight children participated in the competition where Charlie emerged as the winner and Eniza was the runner-up. Lamgrace and Chubainla Jamir were the judges of the competition.
Essay competition
As part of the Hornbill festival, Synergy group Enterprise with the support of the Department of Tourism organized essay writing competition on the topic ‘Kohima Smart City’ and ‘Plastic free Nagaland’ for group B & C respectively on the second day of the hornbill festival at Naga Heritage Village,Kisama. Eight students participated in the competition.
The winner of group B (class 4-6) was Dezevino Zashimo from St Paul School, first runner up was Meguno Zashimo from St Paul school – the 1st prize winner was awarded Rs 5000 along with certificate of merit and 2nd prize winner received Rs 3000 with certificate of merit. Winner of group C (class 7-9) was Angel Raikhan from Mount Hermon Higher Secondary school and the runner-up was Viphrezo Vüprü from Mezhur Higher Secondary School. They were awarded Rs 4000 and Rs Rs 2000 along with certificate of merit respectively. The
Flower Show
Results for the exhibition of flowers, vegetables and spices were declared and prizes were handed out to the winners at Floral Galleria, Hortiscape, Kisama on December 3.
The winners of different categories of were:
Ferns and Foliage: Akocie – 1st prize, Asheli Zhimo – 2nd prize, Therovizo – 3rd prize and Azai – 3rd prize
Cacti and succulents: Nyiepou Ki – 1st, Huve – 2nd and Nini Ekhe – 3rd.
Indigenous Foliage and Flowers: Njusha Chung – 1st, Kevi Pienyu – 2nd and Kehosale – 3rd.
Bulbs and Tubers: Azeno – 1st and Mezhükhonuo Kulnu – 2nd.
Orchids (Hybrid): Azeno – 1st, Temsuyangla Pongen – 2nd and Anei Chuse – 3rd.
Bonsai: Abeni Kapfo – 1st, Abeni Kapfo – 2nd and Vilakhono – 3rd
Perennial: Kozono – 1st, Nisa – 2nd, Khrienuo Solo – 3rd, Nisa – 3rd Nourhevinuo Khezhie – 3rd and Nenya Kath Liezietsu – 3rd.
Annuals and Biennials: Tiarenla Mozhui – 1st, Doshila – 2nd and Athoü – 3rd
Flower arrangements (Fresh): Yatetinla Ao – 1st, Pekruvinuo Pienyü – 2nd and Vilerei – 3rd
(Page News Service)