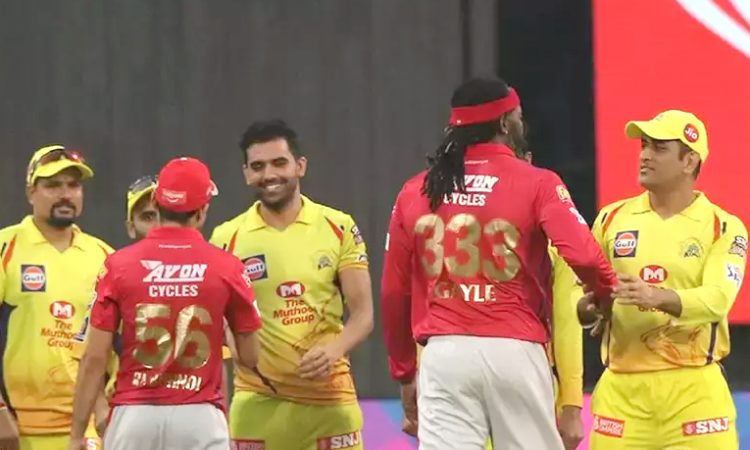 ABU DHABI, November 1: Chennai Super Kings crushed Kings XI Punjab by nine wickets to end their worstever IPL season on Sunday on a positive note, with Ruturaj Gaikwad’s third successive half-century providing hope for a bright future.
The result also cut short KXIP’s campaign in the 13th season of the lucrative event.
KXIP needed a win in their final league game to remain in contention for the play-offs besides depending on other results. But CSK had other ideas.
Bringing his big-hitting prowess to the fore, Deepak Hooda lifted a floundering KXIP to 153 for six with a counter-attacking 30-ball 62 after being invited to bat.
In reply, the returning Faf du Plessis (48) provided CSK the impetus at the top with young Gaikwad playing second fiddle.
The seasoned South African hit four boundaries and two sixes in a firstwicket stand of 82 with Gaikwad in just under 10 overs.
As he looked to put the match beyond KXIP’s grasp, du Plessis got out after going for a premeditated scoop off Chris Jordan, who smartly took the pace off the ball.
The needless shot, notwithstanding, CSK never looked in trouble with the duo of Gaikwad and Ambati Rayudu taking them home with seven balls to spare.
Gaikwad remained not out on 62 off 49 balls after striking six boundaries and a six, while Rayudu made a run-a-ball 30.
Earlier, Hooda smashed four sixes and three fours during his entertaining stay in the middle.
Thanks to Hooda, KXIP managed 40 runs in the last three overs after CSK, opting to field, choked their middle-order for runs.
Hooda picked his spots cleverly and also ran well between the wickets on a day when his more accomplished batting colleagues failed to capitalise on their starts.
Pacer Lungi Ngidi picked up three for 39 for CSK.
Returning to the side after an injury-forced break, Mayank Agarwal got KXIP off to a breezy start, collecting two boundaries off Deepak Chahar’s first over.
In-form skipper K L Rahul got into the act with the day’s first six, over the third man region before scoring two boundaries off Shardul Thakur.
In the next over, Agarwal welcomed Ngidi by driving him to the long-off boundary, but the South African had his revenge in the next delivery as the opener edged the ball into the middle stump.
Three tight overs followed during which Ngidi bowled Rahul with a welldisguised full slower ball at off stump.
After a brisk start by KXIP, the CSK bowling attack did extremely well to strangle the strong opposition batting that comprised the likes of Chris Gayle and Nicholas Pooran in the middle-order.
From 44 for no loss in five overs, KXIP were struggling at 65 for two at the end of the 10th over.
Shardul made life more difficult for Punjab as Pooran’s thin inside edge was taken by Mahendra Singh Dhoni.
In the penultimate ball of the 12th over, leg-spinner Imran Tahir dealt a body blow to KXIP as he had Gayle trapped in front of the wicket. The big-hitting Jamaican went for a review but the ball pitched in line and was clearly going to hit the stumps.
KXIP, in between, enjoyed a couple of good overs but CSK maintained their stranglehold.
Hooda then scored some useful runs down the order, including smashing Ngidi for two sixes, as KXIP ended the innings on a blazing note.
IPL: Dhoni confirms he will play for Chennai Super Kings in 2021
Chennai Super Kings (CSK) fans can breathe easy. MS Dhoni will definitely play for the franchise in the 2021 season. The CSK skipper said so himself during the toss ahead of their final league game against Kings XI Punjab this season.
Asked by commentator Danny Morrison whether the Kings XI encounter will be his last game for CSK, Dhoni left no room for ambiguity when he clearly stated: “Definitely not.”
CSK, of course, are out of the playoff race this season and it had led to speculation over the past week whether Dhoni will be coming back next season. As reported by TOI earlier, though, CSK CEO Kasi Viswanathan had confirmed that the 39-year-old will lead the team next season too.
“Yes, definitely. I am very confident that Dhoni will lead CSK in 2021. He has won three titles for us in the IPL. This is the first year we have not qualified for the playoffs. No other team has done that. One bad year does not mean we will have to change everything,” Viswanathan told TOI on October 26.
“We didn’t play to our potential this season. We lost games that we should have won. That pushed us back,” Viswanathan added.
Dhoni, who announced his retirement from international cricket in August, hasn’t been at his best with the bat this season. He has scored only 200 runs in 13 matches at a strike rate of 116.27 without a single half-century under his belt. He admitted at the start of the campaign that he felt a bit undercooked. Before the IPL, after all, he had played no competitive cricket since India’s World Cup exit in July 2019 and the Covid pandemic only extended his hiatus from the game. (PTI/TNN)