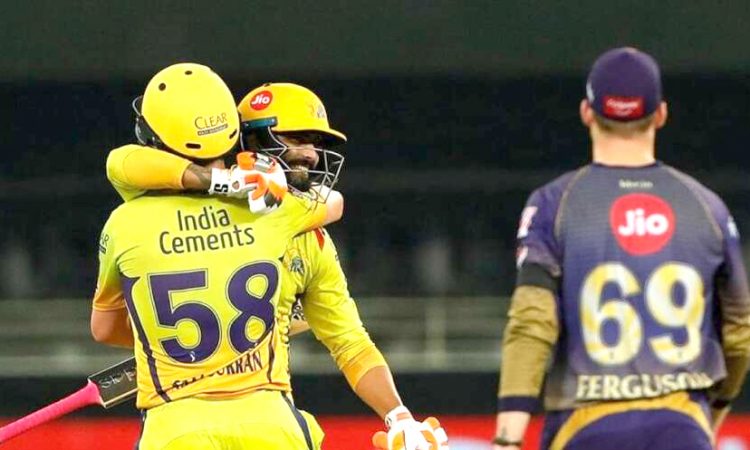 Dubai, October 30: In a run chase where fortunes fluctuate frequently, Ravindra Jadeja (31 not out off 11 balls) held his nerve to help Chennai Super Kings (CSK) clinch a six-wicket win against Kolkata Knight Riders (KKR) in Dubai on Thursday. Chasing 173, Jadeja’s late heroics ensured that the good work of Ruturaj Gaikwad, who scored 72, did not go to waste. CSK’s victory has severely dented KKR’s chances of making the playoffs.
Needing 30 off 12 balls, CSK seemed to have made a mess of the chase after being in control at one stage. Jadeja, though, bailed CSK out by helping them get 20 runs off the 19th over bowled by Lockie Ferguson. And he wasn’t done yet. The equation boiled down to 7 needed off 2 balls after the first four balls of the final over by Kamlesh Nagarkoti went for only three runs. Jadeja duly dispatched the next two balls for sixes and sealed the contest. Nitish Rana’s 87, meanwhile, went in vain as did the efforts of KKR spinners Varun Chakravarthy (2/20) and Sunil Narine (0/23).
Not only the loss made things tougher for KKR, it also sent Mumbai Indians into the IPL play-offs with the defending champions becoming the first team to qualify.
KKR had built some early pressure on CSK in the run chase, but all that pressure was lost when Eoin Morgan introduced Rana to bowl his part-time off-spin after 9 overs. CSK were only 58/1 at that stage, but they punished the offie for 16 runs in the over and injected momentum into their chase.
From thereon, Gaikwad and Ambati Rayudu played some delightful strokes and seemed in control of proceedings. By the time Rayudu departed for a 20-ball 38 in the 14th over, CSK needed 55 from 38 balls with eight wickets in hand.
The situation became more complicated for CSK when MS Dhoni departed in the next over after being outgunned by a faster delivery from Varun. The TN mystery spinner had dismissed Dhoni during their previous encounter too.
It was up to Gaikwad to see it through, but he wasn’t able to. He attempted a ramp shot to fine leg in the 18th over and found his stumps rattled by Cummins.
Put in to bat by Dhoni, KKR were off to a steady start with Shubman Gill and Rana stitching together 53 for the opening wicket. Gill’s innings ended when he played down the wrong line to a ball that did not turn and was bowled by Karn Sharma in the eighth over. With Rana struggling to get going early on, KKR decided to send Narine in at No. 3 to counter CSK’s two left-arm spinners and leg-spinner. The move did not come off as Narine perished after hitting just one six.
At 60/2 in 8.3 overs, it was perhaps prudent for Morgan to come in and take charge as skipper. The England left-hander, however, came in only in the 13th over after the fall of the inexperienced Rinku Singh.
By the time Morgan came in, Rana had spent enough time at the crease for him to take the initiative. The 16th over was particularly fruitful as Rana smashed Karn Sharma for three successive sixes. Rana’s downfall eventually came in the 18th over when he miscued a lofted shot against an off-cutter by Lungi Ngidi and was caught by Sam Curran at long-on. (TNN)