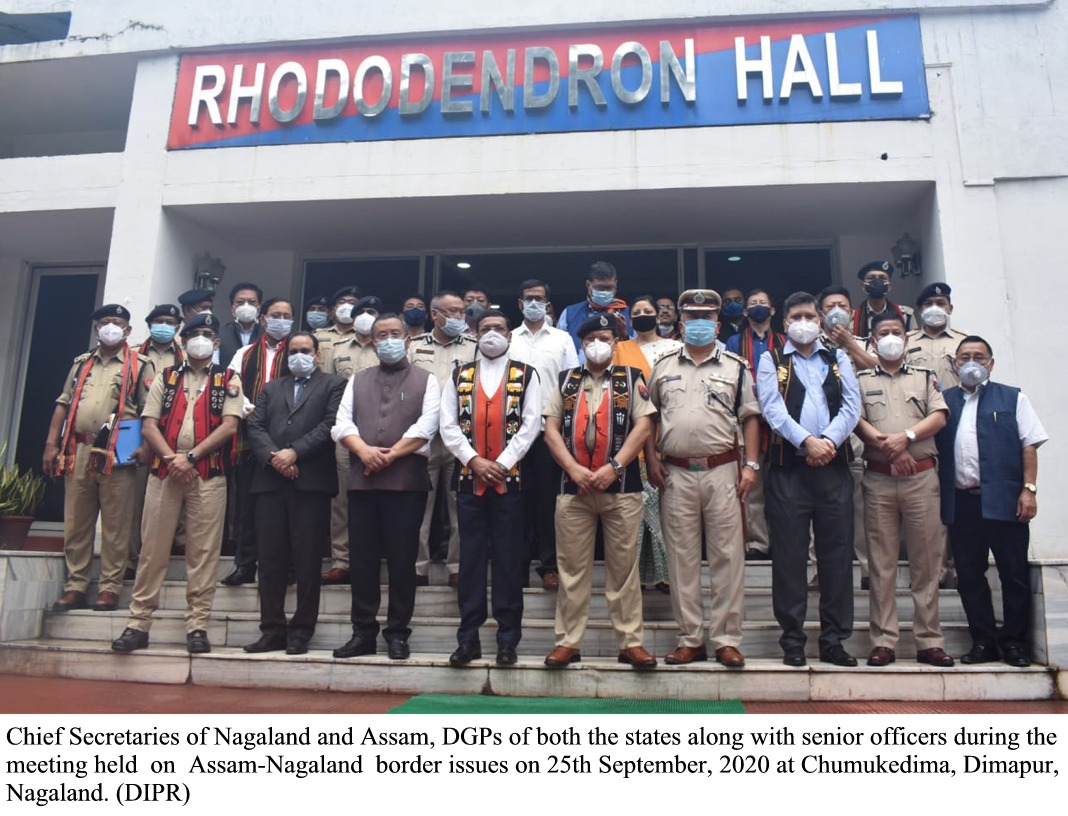 Dimapur, September 25: A Chief Secretary level meeting on Assam-Nagaland border issues was held on Friday at Rhododendron conference hall, Central Police Officers’ Mess, Police Complex, Chumukedima, Dimapur.
In the meeting, several important issues pertaining to the inter-state border areas, the disputed area belt (DAB), and the provisions of the Special Operating Procedure (SOP) for deployment of CAPFs in DAB along the Assam-Nagaland border were discussed.
Chief Secretary Nagaland and DGP Nagaland stressed the need for maintenance of neutrality by the central forces and other security forces of Assam in the disputed area belt and also for not taking any unilateral action which may create misunderstanding. The matter regarding the constraints existing in the present SOP from the view point of Nagaland was also brought up and it was impressed for taking suitable corrective measures in this regard.
Chief Secretary, Assam, Additional Chief Secretary, Home, DGP Assam and other officials brought up the need for having joint patrolling by the security forces of both the States in the disputed area belt and for holding border meetings on a regular basis between the concerned DCs, SPs, and the border magistrates of the two States so that any issue or situation developing anywhere could be sorted out amicably. It was also agreed by everyone that there should be regular communication among the senior officials of both the State looking into the border matters.
In the meeting it was felt that SPs of the bordering districts of the two States should further strengthen the system of coordination and cooperation among themselves so that prompt action gets taken against criminal and anti social activities in the border areas. It was also decided to encourage frequent sports and cultural exchanges between the people of the two States living in the border areas.
The team from Assam led by Kumar Sanjay Krishna, IAS, Chief Secretary, Assam, consisted of Jishnu Barua, IAS, Additional Chief Secretary, Home, Bhaskar Jyoti Mahanta, IPS, Director General of Police, Mukesh Agarwal, IPS, SDGP (Border), other senior officials and the Deputy Commissioners and Superintendents of Police of Karbi Anglong, Dima Hasao, Golaghat, Sivasagar, Jorhat and Charaideo.
The team from Nagaland was led by Temjen Toy, IAS, Chief Secretary Nagaland and consisted of T. John Longkumer, IPS, Director General of Police, Abhijit Sinha, IAS, Principal Secretary, Home, Renchamo P. Kikon, IPS, ADG (L&O), other senior officials of the State along with the Deputy Commissioners and Superintendents of Police of Mon, Longleng, Mokokchung, Wokha, Dimapur and Peren.
A release issued by Principal Home Secretary Abhijit Sinha said the meeting concluded with Nagaland Chief Secretary expressing his appreciation to Assam Chief Secretary for taking initiative for the meeting held after six long years and suggested for having such meetings at regular intervals in the coming years. (Page News Service)