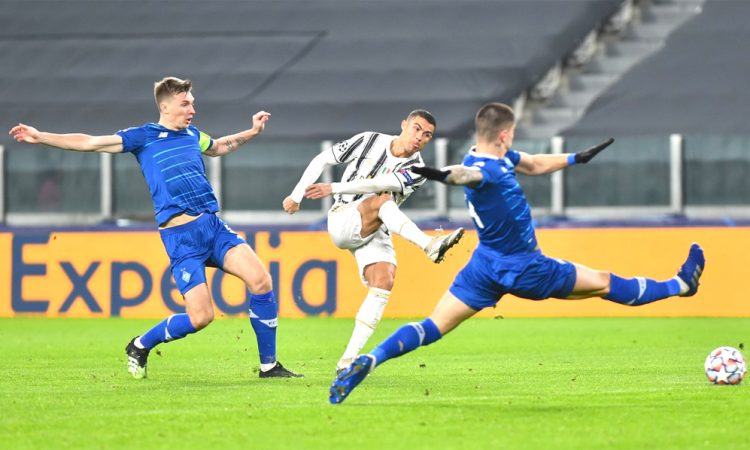 TURIN, December 3: Juventus forward Cristiano Ronaldo scored the 750th goal of his remarkable career in a 3-0 win over Dynamo Kyiv on Wednesday as Stephanie Frappart became the first female referee to take charge of a Champions League match.
Federico Chiesa, with his first-ever Champions League goal, and Alvaro Morata were also on target while Ronaldo reached another milestone although it was far from his most spectacular goal as the ball appeared to go in off his shin.
The 35-year-old has scored 450 goals for Real Madrid, 118 for Manchester United, 102 for Portugal, 75 for Juventus and five for his first club, Sporting.
With Juventus already qualified from Group G and Dynamo Kyiv already eliminated, the main interest was focused on Frappart but the Frenchwoman was barely noticed — usually regarded as a good sign for a referee’s performance.
Frappart, who made her Ligue 1 debut in April last year, booked three players and ignored one penalty shout from the Ukrainians in the first half when Benjamin Verbic went down under a challenge from Leonardo Bonucci.
Juve, second in the group with 12 points and three behind Barcelona, went ahead in the 21st minute when Chiesa scored with a textbook downward header from Alex Sandro’s teasing cross.
His first goal in the competition came just over 20 years after his father Enrico scored his last, for Fiorentina against Bordeaux.
Ronaldo side-footed against the bar before halftime but, as usual, the Portuguese was not to be denied and was on target in the 57th minute with his tenth goal in eight games this season.
Chiesa whipped in a low cross, goalkeeper Georgiy Bushchan palmed it against Morata and Ronaldo scored from close range. The goal was confirmed after a VAR review.
Chiesa was also involved in setting up the third goal for Morata in the 66th minute to round off a convincing Juventus display.
Champions League: Four-goal Olivier Giroud seals top spot for dominant Chelsea
Striker Olivier Giroud scored four as a dominant Chelsea won 4-0 at Sevilla on Wednesday to secure top spot in Champions League Group E with a match to spare.
The result left Chelsea with 13 points from five games, three ahead of second-placed Sevilla with a better head-to-head record against the Spanish side after their 0-0 draw at Stamford Bridge in the reverse fixture.
Chelsea manager Frank Lampard fielded an adventurous formation with three forwards behind Giroud and his bold move paid dividends as the Frenchman fired on all cylinders.
Giroud opened his account in the eighth minute with a left-footed finish from 10 metres after a darting run through the middle by Kai Havertz, with Chelsea missing two more chances in a lop-sided first half.
There was more one-way traffic after the break as Giroud doubled the lead in the 54th minute, beating goalkeeper Alfonso Pastor with a dinked rightfooted finish having side-stepped a defender after Mateo Kovacic’s clever pass.
He made it 3-0 with a thumping 74th-minute header from substitute N’Golo Kante’s inch-perfect cross and then put the icing on the cake with an 83rdminute penalty after he was fouled by Sergi Gomez.
Sevilla, who also booked a last-16 berth alongside Chelsea in the previous round of games, looked toothless up front and only had Nemanja Gudelj’s volley, which sailed over the bar, to show for their efforts.
In the group’s other fixture played earlier on Wednesday, Russian side Krasnodar secured a berth in the Europa League last 32 with a 1-0 home win over French rivals Stade Rennais. (Reuters)