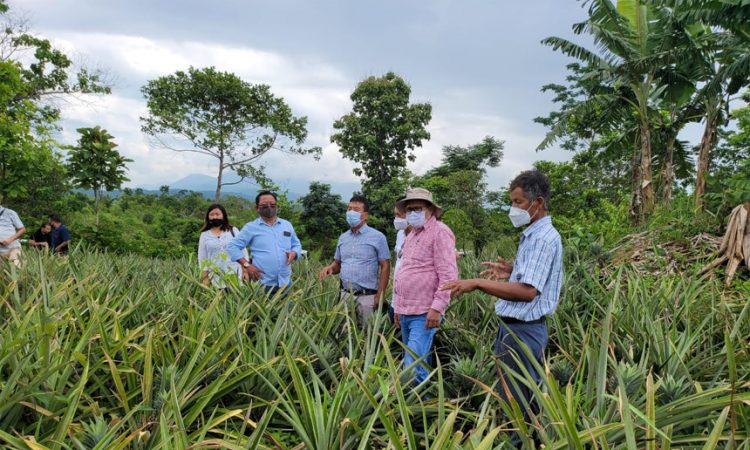 DIMAPUR, JUNE 22: Agriculture Production Commissioner Nagaland, Y Kikheto Sema today reiterated that Agri and Allied Departments would seriously ponder to create more water bodies such as check-dams, water harvesting, ground water, etc., as the State’s farming community, comprising of 70% of the total population has been badly affected due to drought-like situation with no rain from December 2020 to April 2021. He said this to farmers during his tour today to several villages including Molvom, Molsan, Tsithrongse and Bade villages, under Dimapur district.

At Molvom and Molsan areas, Sema met members of the Pineapple Farmer Producing Company (FPC) and visited pineapple fields and was happy to see the healthy pineapples, as they do not require much rain. Pointing out that presently pineapples are grown in about 1000 hectares of land within that area, Sema encouraged the pineapple growers association to grow more and further suggested to the Horticulture Department to hold an exhibition of Nagaland pineapples at Delhi in July or August this year.
“We need to showcase to outsiders that our pineapples are one of the sweetest in the world”, Kikheto said. Sema assured that the State Government would provide logistic support and cooperation to pineapple growers and said, “Let us try to reach out to other places including European and Asian countries.”
At Tsithrongse and Bade villages, Sema visited vegetable farms and regretted that the areas were badly affected due to scanty rainfall. He informed that the State Chief Minister has directed the Agri and Allied Departments to create more water bodies for agricultural activities instead of depending on rain alone.
Sema also stated that the Departments would provide the required Rabi seeds in advance to affected farmers to recover the losses during coming September and October. Admitting that the last 2 years have been very challenging for agricultural activities due to the pandemic, Sema nevertheless encouraged farmers not to give up and advised them to walk the extra mile once the pandemic is over.

Observing that continuity of the drought-like situation may lead to food crisis, Kikheto appealed to all Christians of the State as believers to pray to God for rescuing us during such extra ordinary times.
APC, Nagaland, was accompanied by Dr. R Elithung Lotha, Director Horticulture, Ben Yangthan, Director Agriculture, DAO and DHO, Dimapur.
(Page News Service)