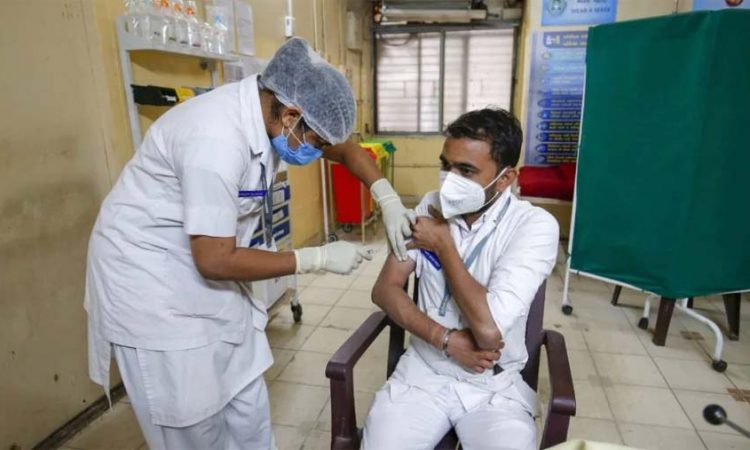 New Delhi, January 18: The Union Health Ministry on Monday said that 1,48,266 people across 25 states and Union territories got COVID-19 vaccination shot till 5 pm on Monday.
“A total of 3,81,305 beneficiaries have so far been vaccinated (till 5 pm on Monday) as per provisional reports,” said Manohar Agnani, Additional Secretary in the Ministry.
Agnani informed that 580 Adverse Events Following Immunization (AEFIs) have been reported so far since the vaccination drive against coronavirus began in India on January 16. Seven hospitalizations have so far been reported in the country so far.
The World Health Organization defines AEFI or Adverse Events Following Immunization as any untoward medical occurrence which follows immunization and does not necessarily have a causal relationship with the usage of the vaccine.
“Two persons died after taking COVID-19 vaccine in Uttar Pradesh and Karnataka. Death of the UP resident is not related to vaccination while a post mortem is planned today for the second person,” he added.
In Delhi, three hospitalizations were reported, out of which, two have been discharged, and one with fainting is under observation at Max Hospital, Patparganj.
In Uttarakhand, one of the beneficiaries is stable and under observation at AIIMS Rishikesh, the official stated.
In Chhattisgarh, one beneficiary is under observation, while in Karnataka, two cases of hospitalizations were reported, he said.
“No case of serious/severe AEFI attributable to vaccination till date,” the additional secretary added.
India kicked off the world’s largest Covid-19 vaccination drive on Saturday.
Sanitation worker Manish Kumar became the first person in the country to be vaccinated against coronavirus on Saturday. Kumar had received his vaccine shot at New Delhi’s (AIIMS).
The country plans to inoculate nearly 30 crore people with two doses of its Covid-19 vaccines in the first 6 to 8 months of 2021. Frontline workers will be followed by around 27 crore people older than 50 or deemed high-risk because of pre-existing medical conditions. (Agencies)