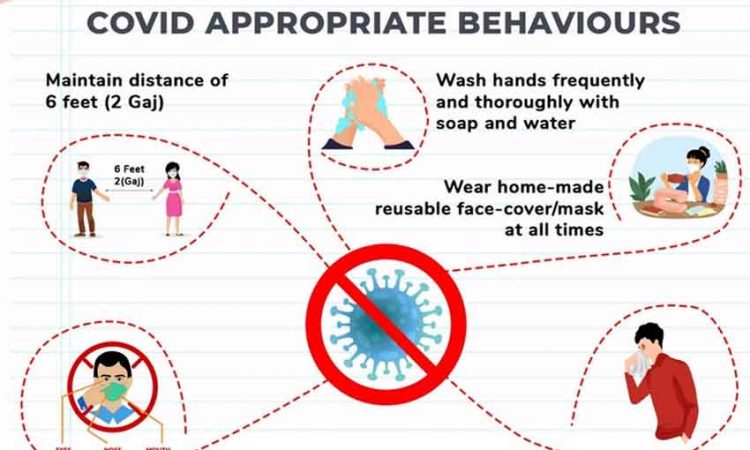 New Delhi, May 9: With the second wave of the COVID-19 pandemic ravaging the country and concerns being raised about a possible third wave, experts caution that the next wave could be less severe if people keep following COVID-appropriate behaviour and a large portion of the population is vaccinated.

According to the Union Health Ministry data released on Sunday morning, India recorded 4,03,738 fresh COVID-19 cases in the last 24 hours, pushing the country’s cumulative tally to 2,22,96,414, while the death toll climbed to 2,42,362 with 4,092 daily deaths.
There has been a sharp surge in infections over the past couple of months, making the second wave much worse than the first one that began in early 2020 and peaked in the last quarter of that year before the tally hit a trough in the first quarter of 2021.
Several experts believe that a casual approach that followed the trough of the first wave could be a possible reason for the pandemic raising its head again, though others are also putting the blame on the new mutants and variants of the virus being more virulent.
K VijayRaghavan, Principal Scientific Adviser, had said on Wednesday last week that the third wave was inevitable and it was necessary to be prepared for new waves, but clarified two days later that the “insidious asymptomatic transmission” can be stopped if prescribed guidelines about precautions, surveillance, containment, treatment and testing are followed.
“If we take strong measures, the third wave may not happen in all places or indeed anywhere at all. It depends on much how effectively guidance is implemented at the local level in the states, districts and cities everywhere,” he said.
According to experts, in a few months when the immunity people have developed naturally or with the help of vaccination fades, the virus strikes again and the only thing that can stop the virus from bouncing back is how people are guarding themselves.
“Early this year, as the new cases receded, people started interacting as if there was no virus. The immunity had already started declining. They organised mass gatherings, they stopped wearing masks, giving the opportunity to the virus to strike again,” said Dr Anurag Agarwal, director, Institute of Genomics and Integral Biology, New Delhi.
“While we anticipate a third wave, we cannot say when exactly it will come or how severe it will be. But if people keep following COVID-appropriate behaviour in coming months and we are able to vaccinate a large number of people, the third wave could be less severe,” Dr Agarwal added.
While the sudden surge in the number of cases during the second wave has led to panic among people, what is adding to their fear is the constant threat of new mutants of the virus and how these mutants could potentially harm them.
Some experts, however, believe that mutations are a common phenomenon, and the mutations do not generally affect the prevention, treatment, or vaccination.
‘Every virus, while replicating in the host’s body, mutates. The virus is a prolific multiplier, but its replication is error-prone and so every copy it makes of itself may not be its exact replica.
“Any change, minor or major, that occurs in its structure is known as a mutation. A virus undergoes hundreds and thousands of such mutations,” said Dr Saumitra Das, Director, National Institute of Biomedical Genomics (NIBMG ), Kalyani, and professor, Indian Institute of Science, Bangalore.
Experts also said that every mutation cannot be a cause of concern and genome sequencing of a virus is done to keep a track of any mutation that can make a virus more dangerous.
“What concerns us is whether a mutation is making it more transmissible, or virulent; whether a mutation has the potential to make the existing medicines or vaccines ineffective against the virus. If so, the mutant is classified as a variant of concern (VoC),” said Dr Das.
Mutations shown so far in the novel coronavirus have not warranted any change in the required treatment or vaccines, but experts believe it is technologically possible to tweak the medicine or a vaccine quickly to fight a mutant that poses a threat to their efficacy.
“But in the case of COVID-19, since its spread has been so rapid, it is not giving our scientists enough time to identify all the mutants. And so, the role of COVID-appropriate behaviour is as critical as ever in controlling its spread,” said Dr Arun Sharma, a community medicine expert and director of NIIRNCD (ICMR), Jodhpur.

He said a virus mutant can escape the body’s immunity and undo the efforts to developing an effective vaccine or medicine against it, but chances of it escaping the shield called COVID-appropriate behaviour are low.
“A three-ply mask, frequent hand washing or sanitising, maintaining physical distance, avoiding crowd, especially indoors, are still most effective in controlling the spread of COVID-19 virus,” Dr Sharma added.
He said any virus starts a chain of transmission by infecting the most vulnerable population and it keeps infecting till the time everyone susceptible is infected and then it starts dying out.
“We treat the patients with antiviral drugs, and we protect the population through vaccination. These measures help us break the virus’s chain of transmission,” he added. (PTI)