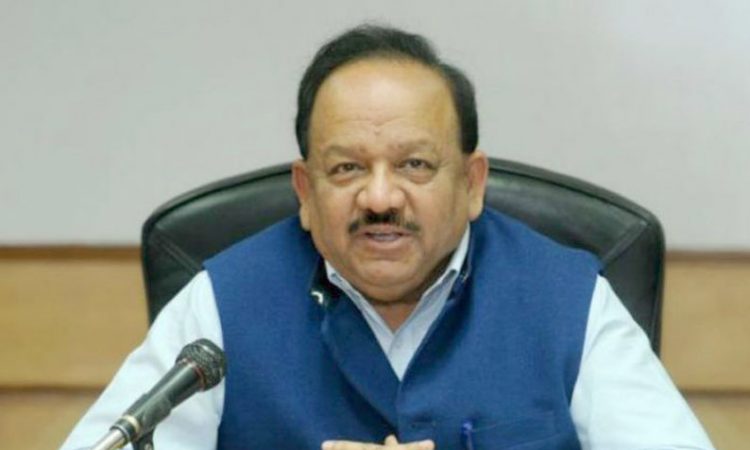 New Delhi, October 28: Union Health Minister Harsh Vardhan on Wednesday reviewed the pandemic situation and preventive measures being adopted in Tamil Nadu and stressed the need for staying vigilant for the next three months as the long festive season poses “a significant risk that may threaten the improvements made against COVID-19 so far”.
In the virtual meeting with Tamil Nadu Health and Medical Education Minister C Vijayabaskar and senior state officials, Vardhan emphasised that the prime minister’s message of wearing a mask/face cover, maintaining physical distance and frequent handwashing should reach the last citizen, the health ministry said.
Reiterating the prime minister’s clarion call of building a ‘jan andolan’ (mass movement) against COVID-19, Vardhan said, “The state needs to enhance the awareness amongst the citizen regarding the need and virtues of using masks/face covers, physical distancing and regular hand hygiene.”
“The coming long festive season pose a significant risk that may threaten the improvements made against COVID-19 so far. We should all be vigilant for the next three months. Following simple COVID-appropriate behaviour will be effective in cutting transmission of coronavirus. The prime minister’s message of wearing a mask/face cover, maintaining a physical distance and frequent handwashing should reach the last citizen,” he was quoted as saying in the statement.
Vardhan said the country has seen significant improvement in the COVID-19 parameters.
“The number of cases and deaths are in a declining phase. The cases have been substantially reduced. The active cases stand at 6,10,803. The recovery rate of India is highest in the world at 90.85 per cent. The case fatality rate is also declining and stands at 1.50 per cent. The country has more than 2,000 labs today,” he said.
Comparing the COVID-19 parameters of Tamil Nadu with that of the country, the ministry said that the state has a recovery rate of 94.6 per cent which is more than the national recovery rate. The case fatality rate is 1.54 per cent which is at par with the national average, the statement stated.
Vardhan lauded the proactive usage of Aarogya Setu app and ITIHAS by Tamil Nadu to identify hotspots in the state.
Appreciating the efforts of the state in reducing its active case contribution, Vardhan expressed concern over the COVID-19 trajectory in Chennai, Chengalpattu, Coimbatore, Thiruvallur, Salem, Kanchipuram and Cuddalore districts where the disease burden is the highest.
He also spoke with officials of the districts where the active cases are increasing or the fatality rate is rising, the statement said.
The health authorities of the state apprised the Union minister that they have done more than two lakh tele-consultations till date which is the highest by any state, the statement said.
The total tests conducted in the state are 96,60,430, of which 98.99 per cent are RT-PCR. Special screening centres and testing camps have been established to increase testing.
The death audit is done thrice a week. Dedicated COVID-19 ambulances along with improved oxygen facilities, state-specific surveillance reporting platform (STOP Corona Portal) and fever clinics are some of the best practices followed by the state. They also updated the Union minister on the steps being taken to spread the message of ‘Jan Andolan’, the statement said.
Union Health Secretary Rajesh Bhushan underscored the importance of focussing on the population in the 41-60 year age group that are exhibiting high levels of infection and almost 30 per cent of the mortality in the state. (PTI)